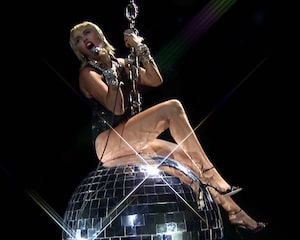 “All of a sudden we notice she’s convulsing …”

Miley Cyrus’ first day on “The Voice” almost ended in total disaster, after one of her many pets had an accident on set.

During an interview with Geena The Latina and Frankie V Morning Show in San Diego this week, the “Midnight Sky” singer was asked to reveal the most embarrassing thing her dogs have ever done.

“I can’t tell you the story … I just can’t. Know that it’s really good, but I can’t tell you,” Cyrus began, alluding to something her dog MaryJane did which she wouldn’t reveal. “I don’t think you can air anything that I’m about to tell you. Anything that comes out of my mouth from here on out, you will not be able to air.”

She then shared a more PG-13 rated tale about her beagle, Little Dog.

“One thing my dog did that doesn’t have to do with this story, my dog’s a freak, I’ll say that. My other dog, the first day of ‘The Voice,’ I’m like so excited — this is sad, but it was handled and my dog is totally thriving and fine,” she prefaced the tale.

“You know on sets there’s like wires everywhere, we got all the people singing … and my dog goes and bites on the wires of the TV everyone’s watching and all of a sudden we notice she’s convulsing and getting electrocuted,” Cyrus continued. “You can’t open her mouth, because the person who’s trying to open her mouth is also being electrocuted. But she was totally fine, her name is little dog and she is thriving in Nashville, Tennessee and doing great.”

Cyrus then continued to tease the more NSFW story about her other dog, without actually revealing what happened. Have fun reading between the lines here.

“The story has to do with 2012 Halloween. My dog licking something … it was just a thing,” said Miley. “I had to send a vinyl record player to this human that got … my dog did something very wrong. I had to send an apology gift!”

The singer’s interview was in support of her “MTV Unplugged Presents Miley Cyrus Backyard Sessions” special, airing Friday on MTV.