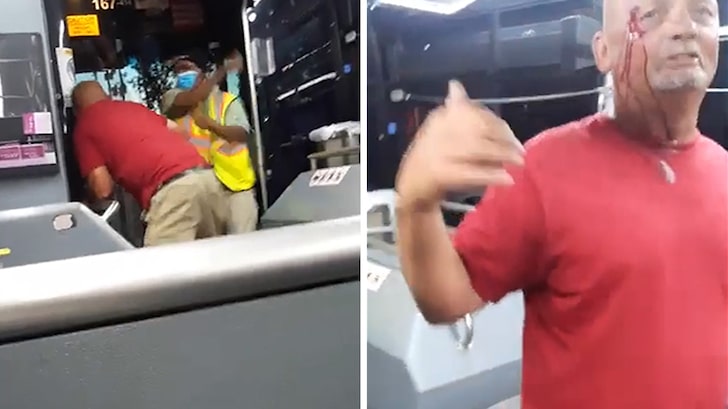 Don’t mess with city bus drivers … they’re fed up, and a mouthy, unruly passenger learned that the hard way when he got a fist to the face.

This video of the bare-knuckle boxing match shows the driver, who’s wearing a face mask, telling the passenger to back up behind the yellow line. The passenger’s apparently pissed about the driver threatening to kick him off the bus … though we don’t know why.

After a few moments of yelling back and forth and tension building … the driver momentarily turns his back, the passenger shoves him and then it was on!

Both men started swinging, but the driver landed several blows … at least one to the guy’s face because he was bleeding badly, and went down to the ground.

As if he got a standing 8 count, the passenger got back on his feet, but clearly didn’t want any more smoke. The driver picked up a phone, we’re guessing to call cops.

It’s unclear when or where this all went down but the video’s going viral. We’re trying to find out if any arrests were made, but the takeaway here is … don’t test public bus drivers.

Essential workers in a pandemic ain’t taking any mess!! Nor should they have to.