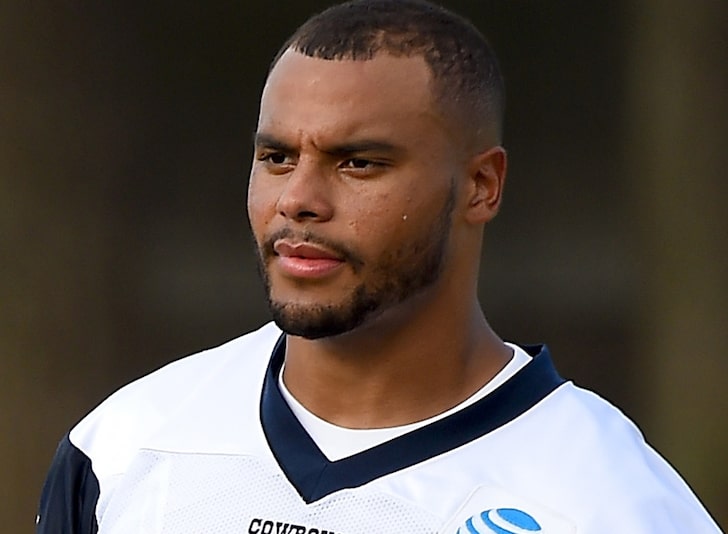 Dak Prescott’s season appears to be over less than a quarter way through the NFL season — he snapped his ankle on the gridiron this weekend … which left him in agonizing tears.

The Dallas Cowboys are in the middle playing the New York Giants, and in a third quarter drive from the Cowboys … Dak tried making a play up the field himself, when he was taken down by Giants defender and twisted up his ankle horrendously in the process.

Damn! Dak just put it back like that! Praying for a speedy recovery! pic.twitter.com/reNwLIwHzg

You could tell something had gone terribly wrong, because he immediately started waving over to the sideline for help. The Cowboys medical staff rushed over to evaluate him … and once the camera got a close-up shot, it was clear he’d suffered a break, likely his ankle.

NFL reporter Adam Schefter says he’ll be going into surgery tonight for exactly that — so all signs point to that area.

Dak was squirming in pain until they eventually got him on a cart and wheeled him off the field. The guy was in tears, probably because of the pain … but also, because this could very well be a season-ending injury and might torpedo the Cowboys’ chances to go the distance.

😢 Damn Dak, heart hurts for you!

The Cowboys already have a losing record (1-3) and with Dak gone … their next QB up would probably be Andy Dalton, who’s currently listed as the active second string position. It’s not impossible to overcome the odds when a starter goes down — we’ve seen other teams, like New Orleans, have success in recent years. It is challenging though … no doubt.

Dak’s experienced a rough year — prior to Sunday’s damage … he lost his older brother to suicide in April, so a lot of off-the-field turbulence … not to mention the never-ending contract negotiations with Jerry Jones and co., which have left him franchise tagged this year.