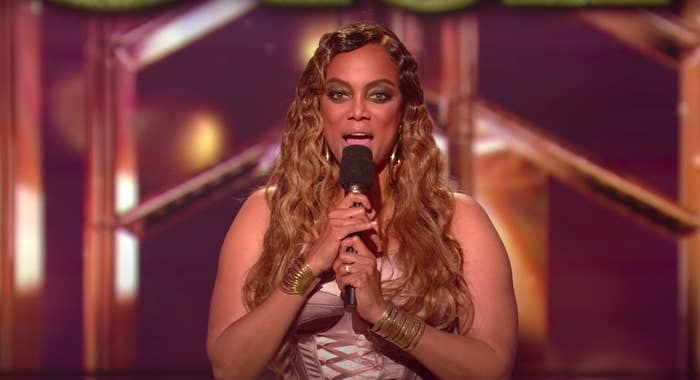 Tyra Banks used to have a talk show where she pretended to be fat, and she wore a “fat suit” out in public. Now, MTO News is hearing that folks on Twitter are saying that Tyra’s now FAT FOR REAL.

Here are some images from 20 years ago, when Tyra wore the fat suit on her daytime talk show:

And here’s what she looked like on the last episode of Dancing w/ The Stars:

Tyra recently gained a reported 100 pounds, since her days as the host of America’s Top Model. And if you look at her IG page, you can clearly see HOW Tyra managed to pack on all that extra weight.

Her page is filled with images of the most unhealthy and fattening foods.

In one pic, she showed herself eating a friend chicken and ice cream sandwich, which was drenched in honey.

And here she is, talking about how people should eat large amounts of ice cream for breakfast: