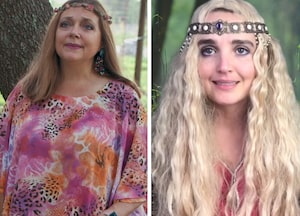 Employees believe the spirit of Travis Maldonado “still lingers” at the animal park.

The “Ghost Adventures” crew is headed to “Tiger King” country.

The special will feature interviews with owners Jeff and Lauren Lowe, who will “reveal rumors and stories about the notorious grounds, including allegations of murder,” per a press release. Travel Channel also said employees “believe the spirit of Travis Maldonado, who tragically and accidentally killed himself inside the park, still lingers and appears in the form of a dark mist.”

“This investigation was wild from beginning to end. We went into it thinking we knew a little about this story already, but there were so many surprises at every turn,” Bagans said in a release. “It’s a super-charged location and it felt surreal to be there. This special has all the drama, characters and twists that you would expect in any Joe Exotic story. But just when you think you’ve seen and heard it all, there’s more.”

The special will also feature a search of the grounds by a forensic team to investigate allegations of buried bodies, with police allegedly shutting down the shoot when cadaver dogs “get a possible hit for human remains.”