Kim explains why it wasn’t caught on tape, while Kylie tweets, “def didn’t say it like that.”

“Keeping Up With The Kardashians” was a wild one on Thursday night, as an off-camera fight between Kendall and Kylie Jenner blew up during a family trip to Palm Springs.

And, as it aired, the Kardashians themselves gave some insight into what went down behind-the-scenes as they live-tweeted along with the episode.

Following a night out to dinner and a drag show, Kendall, Kylie and Kris Jenner’s boyfriend Corey Gamble all decided they would take one SUV together back to Los Angeles — while Kim Kardashian, Khloe, Kourtney and Kris went back to their Palm Springs abode.

It all went to hell when Kendall asked Kylie whether they should give their driver her address, to drop her off at her house first. Kylie, however, didn’t think they’d be getting dropped at their respective homes and was adamant their driver didn’t go to Kendall’s.

While there was no camera in their SUV, Kendall called her sisters in the middle of the fight, where Kylie could be heard screaming, “Why would I drive you over the hill?” as Corey exclaimed, “Stop! Stop! Stop!”

Kendall could then be heard shouting, “You put your heel into my f–king neck!”, before Kylie screamed back, “That’s ’cause you f–king slapped me!” Referring to Corey, Kendall was also heard saying, “This man is wild, he really just said ‘f–k you’ to me.”

On Twitter, Kim responded to a fan saying production should have “kept cameras rolling” during the fight. She explained they “we were done filming when the fight broke out and Kylie left but they still had their mics on and we still had our car cams on!”

Eventually, the other SUV doubled back and picked Kendall up at a nearby gas station. She claimed Kylie and Corey had just left her there and then filled everyone else in on what allegedly went down — explaining Kylie didn’t want to drop her at home and Corey offered to order her her own car. Kendall, however, didn’t want to take a car home all by herself.

“I said, ‘Corey, shut up, you want me out of this car.’ Anything else could have happened. Corey said ‘F–k you.’ And I said, ‘F–k you? You’re gonna say ‘F–k you’?!’ And that’s when I started getting hysterical,” Kendall continued, claiming Kylie said Corey never dropped the f-bomb.

“I’m dead sober, I wouldn’t make shit up and she smacked me or something, so I came back at her, smacked her in the face and then she took her heel and put it into my neck, so I started kicking her back,” Kendall added. “We got in a full fight. The fact that my sister, my blood was reacting that way, it’s so upsetting.”

At that point, Kim read a text she got from Kylie, reading: “‘You guys know I’m a sane person. Kendall said will you drop me off and I said no, I never agreed to that. Kendall’s been in a badass mood all f–king day, that shit was crazy.”

While it’s unclear to what, exactly, she was referring, Kylie tweeted out “def didn’t say it like that lol” during the show’s last few minutes. She also wrote, “sister fights like that are never ok!!!”

Lost footage of what was going on in that car just now @KylieJenner @KendallJenner 😂😂 #KUWTK pic.twitter.com/AJMOOB5dmA

Kylie, Kendall and Kim all got a kick out of one fan’s reaction to the show — in which they shared a gif of Kendall and Kylie kicking each other in a car from way back in the day and wrote, “Lost footage of what was going on in that car just now.”

Kim said, “OMG this is very accurate!!!!”, before reminding her followers that her younger sisters “would fight like this as kids all the time!!!! It really took me back.”

After the episode aired, Khloe tweeted out, “Just remember… family is FOREVER!!!” 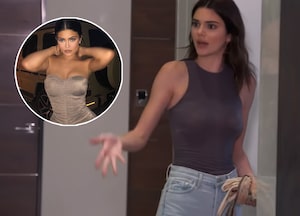