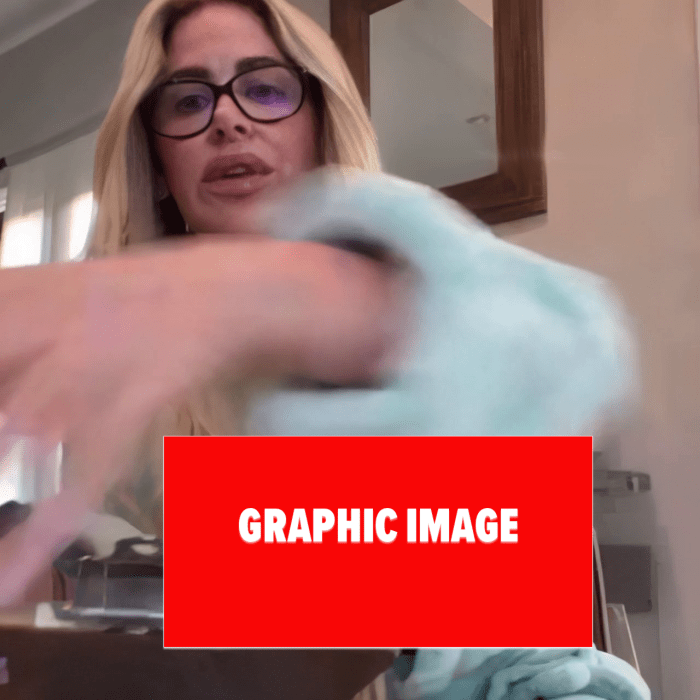 Former Real Housewives of Atlanta star Kim Zolciak had an “accident” over the weekend on social media, MTO News has learned.

While talking with her fans on IG Live, the buxom blonde accidentally opened her robe and exposed herself to her fans.

HERE IS THE GRAPHIC IMAGE – PARENTAL DISCRETION IS ADVISED

Kim claims that the whole thing was just ONE BIG ACCIDENT. But many of her fans think that the reality star may have exposed herself on purpose – as a way to get “clout.”

Here is the censored version of a screenshot:

HERE IS THE GRAPHIC IMAGE – PARENTAL DISCRETION IS ADVISED

Kim is a television personality and singer. In 2008, she appeared as one of the original housewives on the reality television series The Real Housewives of Atlanta.

Zolciak-Biermann left The Real Housewives of Atlanta in 2012 during the fifth season of the series. Earlier that year, she received her own spin-off show titled Don’t Be Tardy for the Wedding, which focused on the preparation of her wedding to football player Kroy Biermann.

The series was subsequently renewed for a second season with a shortened title, Don’t Be Tardy. The fourth season of the show premiered on August 16, 2015. In 2015, she was one of the contestants of the 21st season of the dancing competition series Dancing with the Stars.