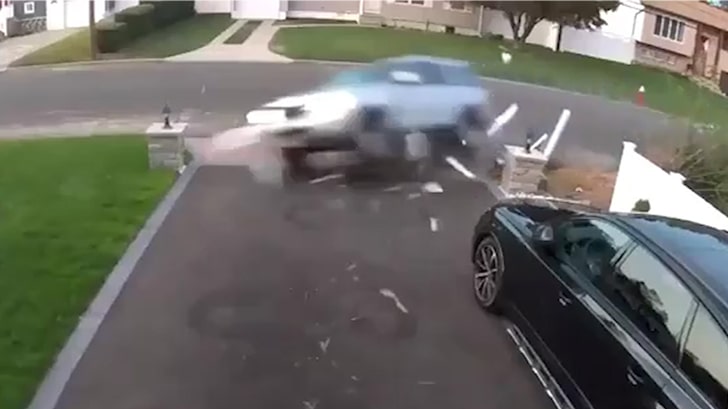 A Long Island mother apparently missed a memo from M.A.D.D. … she got busted for DWI after a terrifying crash — captured on camera — with her 3 young children in her vehicle.

Ashley Thomas-Smith lost control of her Lincoln Navigator, and home surveillance cameras caught the moment she careened through a front yard, nearly flipping the SUV on its side. She then crashed into a home Sunday afternoon and demolished the kitchen.

Check out the video … you can hear the tires screeching and, sadly, the screams of frightened children. Fortunately, the kids suffered no injuries and were released to their father. Thomas-Smith was arrested for DWI and endangering the welfare of a child.

The homeowner, Angelica Reyes, told WCBS TV the crash could have been much, much worse had they been home at the time, because she and her family, including a 2-month-old baby, spend a lot of time in the kitchen.

She also said Thomas-Smith was stuck in the SUV for an hour because the fridge was blocking her door. Her license has been suspended, and she was released with an alcohol-monitoring bracelet. She reportedly pled not guilty to the charges.