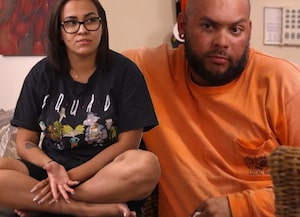 Briana is clearly concerned when DeVoin’s mother suddenly tries to be part of Nova’s life.

Briana DeJesus’ daughter Nova certainly got one heck of a birthday surprise on her eighth birthday: the reappearance of her absent grandmother.

In this sneak peek at Tuesday’s new episode of “Teen Mom 2,” DeJesus reveals  how DeVoin Austin’s mother tried to be part of Nova’s life again … without giving Briana a heads up.

“Nova turns 8 tomorrow and DeVoin took her to lunch earlier today, but when she got back she said it wasn’t just her and her dad there and I’m a little shaken up,” Briana said in a confessional.

While the lunch was just supposed to be a father-daughter affair, Briana said that “when Nova came home, she was like, Oh, I met my grandma.” The reality star said her daughter was fine with everything, but Briana found it “annoying that DeVoin can’t come to me and tell me these things.”

According to Briana, DeVoin’s mother hasn’t seen Nova in seven years — and, while she has no problem letting them have a relationship with each other, she was frustrated his family hasn’t “stepped up all these years.”

She feared Nova’s grandmother could be an “in an out” presence, saying “that’s what their family is all about. They come around when they want to, when it should be all the time.”

In another confessional, Briana said DeVoin’s mother never reached out to them and not once asked how Nova was doing all this time.

“I have to answer to Nova, what am I gonna tell Nova that her grandmother is not around anymore? she asked herself. “I don’t have those answers. So it’s up to Nova’s grandmother to put in the effort to be there for this little girl because she’s missed out already.”