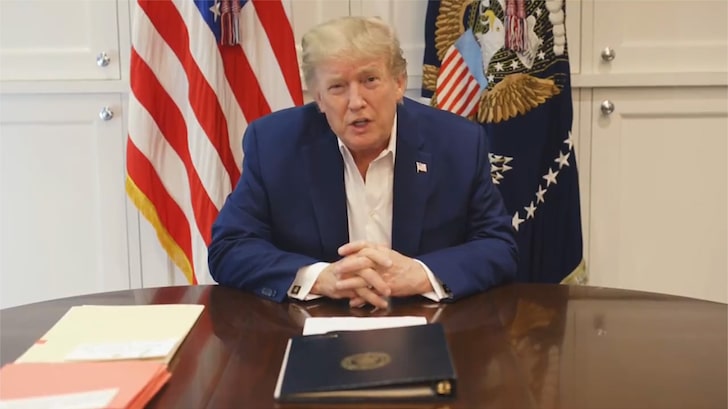 President Trump just delivered his own update on his health … he says he’s feeling much better now after being diagnosed with COVID-19, but his Chief of Staff says the President’s not out of the woods by a long shot.

Trump sat down on camera for a four-minute update from the “Presidential Suite” at Walter Reed National Military Medical Center, explaining he wasn’t feeling so well when he was first hospitalized but is doing a lot better.

It’s now clear Trump was going downhill Friday before going to the hospital. We now know he was having breathing issues and he received supplemental oxygen. Chief of Staff Mark Meadows said bluntly, Trump’s health Friday was “very concerning.”

The Prez is optimistic he’ll be out of the hospital soon and he’s vowing to return to the campaign trail to finish what he started … but he also admits the next few days will be key in determining the course of the virus. Meadows called the next 48 hours “critical.”

Trump sounded pretty much like his normal self while delivering his remarks, and he says he’s gonna beat this thing. POTUS says the therapeutics he’s receiving are working. He did not say anything about being on oxygen.

Melania‘s doing well too, Trump says, and he’s thankful for all the medical professionals at Walter Reed.

It’s interesting … Trump says he was given the option of isolating at the White House, but claims he was told he would have to shy away from others and the Oval Office. Trump says he just didn’t want to be cooped up in a room, so he went to Walter Reed.

That makes no sense. He’s now confined to a hospital suite and when he’s released he’ll go right back to being confined to the White House residence quarters until he tests negative.

Trump says he’s thankful for all the support pouring in from both sides of the aisle and across the country and the globe.