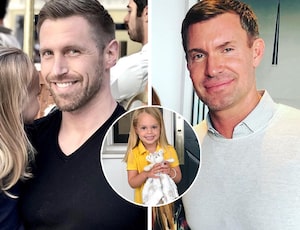 The Flipping Out star just cut two important men from his life.

It’s been a week of big changes for Jeff Lewis, who revealed on his Radio Andy show that he recently fired his assistant of four years, Tyler Meyerkorth, and split (again) from boyfriend Scott Anderson.

On Wednesday, Lewis explained that he had to let one of his employees go, calling it a “very traumatic” experience. While he initially tried to talk about the employee without naming them, he eventually let the name “Tyler” slip. The YouTube description for the clip of him talking about it and the other details he provided confirmed he was indeed talking about his design assistant of four years, Meyerkorth.

According to Lewis, his suspicions around Tyler arose when he received two invoices from furniture company Alder & Tweet — after only placing an order for one delivery. He believes Meyerkorth was “moonlighting” on the side and used Jeff’s discount for one of his own clients.

“I forwarded it to my employee and said, ‘I don’t understand. What is this?'” Lewis explained. “And the person said, ‘I don’t know. It must be some sort of accounting error, let me look into it.”

Lewis called the furniture company himself, before confronting Meyerkorth a second time. “I said, look this is the information I got from the owner … this was delivered and you had a conversation, you actually negotiated the white glove delivery service,” he said.

Lewis claims Meyerkorth told him he had a friend on the same street where the sofa was delivered, adding, “Maybe he ordered the sofa and used your discount.”

“I said, ‘I’m going to give you an opportunity to tell the truth right now,'” Jeff continued, noting that while he can sometimes be “really f–king scary,” he was “calm” and “cool” this time around.

“Jeff talked to Tyler,'” he said, referring to the calmer version of himself, as opposed to the more volatile “Jeffrey.” Realizing he slipped and said Meyerkorth’s name, he added, “Oh, I said Tyler. I’m such an idiot. Oh well, it’s out.”

Though he said the whole situation was “hurtful,” he said he told Tyler they had come to a “crossroads” and while it was “obvious” Meyerkorth wasn’t happy working with him anymore, he wanted the fallout to be “amicable.”

“I really believe in his talent, I think he’s a natural at it. I think he could have a great design business on his own,” he added, also praising Meyerkorth for turning down a big job offer at a time Jeff’s personal life with ex Gage Edward was falling apart. “I heard through the grapevine that he said to the person, ‘I can’t leave Jeff right now,'” added Lewis, “He’s been very loyal. It’s Tyler.”

Though no longer employed by Lewis, Jeff said he would even like to work with him on a referral basis in the future. TooFab has reached out to Meyerkorth for comment.

Earlier this week, Lewis also opened up about yet another separation from sometimes-boyfriend Scott Anderson.

While the two had split a few weeks back, they briefly reconciled last Thursday for dinner at Lewis’ home. “He was very distant, he was very emotionally removed, but we still had a nice time,” he explained. “We had dinner, talked, hooked up a little bit.”

Lewis said he was thrown for a loop when Anderson revealed he had gotten a new apartment for himself in Santa Monica, “11 days after we separated.”

“I was a little thrown by that. That he committed to a year lease in an apartment when he was living with me 11 days ago,” said Lewis. “That was something I had to wrap my head around. I told him, ‘I’m sorry what?’ It was something I had trouble with … not mad or anything, just trying to understand.”

Noting Anderson called it an early night, Lewis said he walked him to his car and “blurted” out that he felt like he wasn’t going to see him again. Though Scott promised they’d see each other the next day, Jeff said he got a text the following morning reading, “I had a really nice time, but this is too much.”

“I was devastated, I was so upset,” Lewis explained. He then said he started getting DMs with screenshots of Scott’s Tinder profile, which had recently been reactivated.

“I was very upset, I started sending texts like, I’m so devastated, I can’t believe this, we’ve only been separated 11 days, this is so hurtful. I did call him an asshole,” he admitted.

Anderson explained that he had only activated his profile because one of his friends had just broken up with their boyfriend and they wanted to see whether he was back on the apps yet.

“I believed him,” added Lewis. “We had a nice talk yesterday, everything has been said, he’s made his peace, I’ve made my peace.”

“Is it over?” he then asked. “Don’t know. But I have to move on with my life now and he needs space anyway. I’m now gonna lay low, I’m not in a space to date at all.”