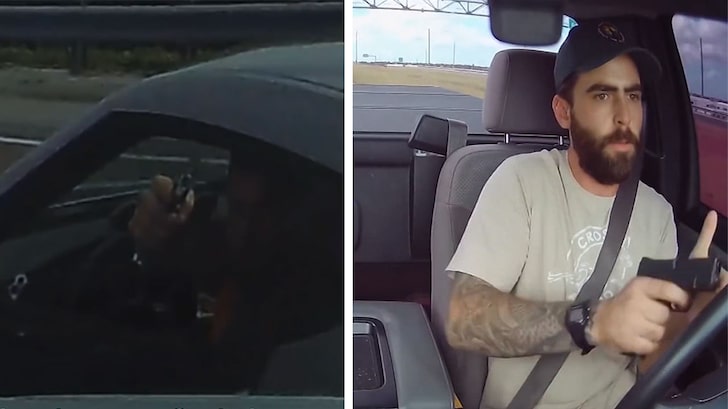 Florida man is back — and this time, he’s shooting through his own windshield at another, apparently armed, driver … all while zipping along the highway.

Marco Mazzetta posted his own dashcam footage showing him and a buddy driving in Orange County, FL, when they encounter an aggressive Nissan 370z driver who pissed off Mazzetta so much he opened fire.

No, he didn’t take aim outside his driver-side window, like in the movies … instead dude literally unloaded through his windshield, and you gotta see how that played out. Shards of glass flying everywhere … as his poor friend in the passenger seat freaked out.

As for why he fired — Mazzetta claims the 370z driver was tailgating him hard, so he brake checked him, causing the other driver to bump him from behind, which you see in the video. Eventually the Nissan speeds around Mazzetta’s truck — and in zoomed-in footage, Mazetta claims you can see the other driver brandishing a gun.

He says that’s why he pulled his piece from his waistband and fired a few rounds. It’s wild … but is it justified???

Mazzetta says he was defending himself, claiming that he feared for his life and his friend’s when he saw the other driver’s gun. It’s unclear if the Nissan got hit at all, but Mazzetta says he pulled off the freeway immediately and reported the incident himself.

It doesn’t appear anyone’s been arrested for this quite yet — but Florida Highway Patrol condemned the altercation entirely, saying this is an example of road rage gone wrong.