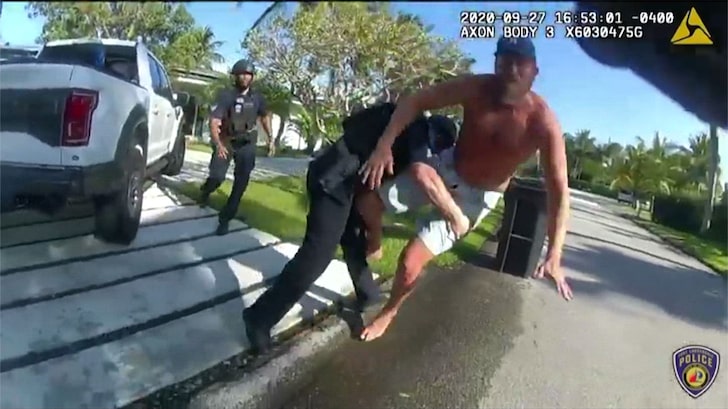 President Trump‘s former campaign manager got tackled by a cop and cuffed as he was talking to another officer about a call to his house for a suicide attempt … and the bizarre incident was caught on body cam.

Brad Parscale was hospitalized Sunday following a report of him being armed and threatening suicide at his Florida home. Based on the footage from one of the responding Fort Lauderdale PD officers … his wife made the call.

Parscale’s wife, who’s wrapped in a towel, tells the cops her husband was “acting crazy” and “going irate” before going into his office and cocking a handgun. She says she went outside to get away from him, but saw him look out the window … then she heard what she thought was a gunshot.

The wife appears to be relieved Brad’s still alive when the cop gets him on the phone. She tells the officer he has 4-5 firearms in the home as the officer tries to convince him to come outside unarmed.

Hours later, Brad does come out — shirtless and barefoot — to let the cops know he was not trying to kill himself. As he approaches the officer he makes it clear he’s unarmed and seems to start explaining what set him off with his wife.

Everything seems pretty calm, but then another officer — reportedly part of the SWAT team — demands Parscale get on the ground and tackles him before he can really respond.

Parscale protests that he didn’t do anything as he’s detained and brought to his feet. The FLPD says he was not injured and taken to the Broward Health Medical Center for emergency mental health services.

Parscale was demoted from his position on the Trump campaign — which he held for 2 years — after the President’s June rally in Tulsa … though he remained on as a senior digital adviser.