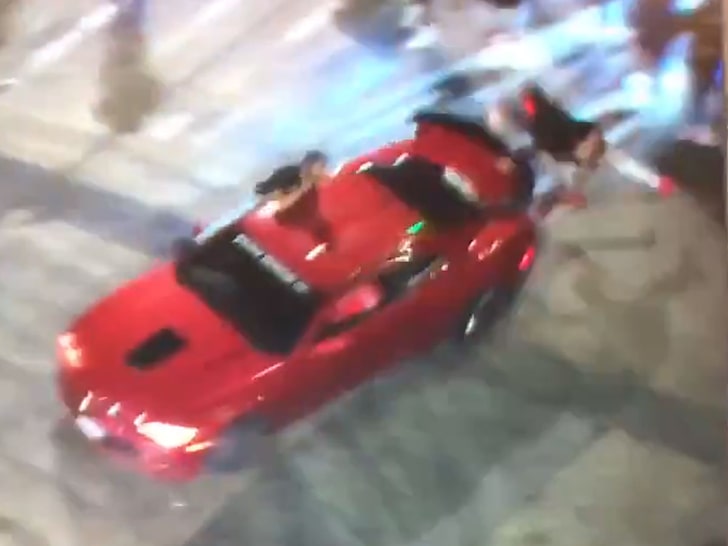 If you thought people getting hit by dangerously spinning cars would stop a good old-fashioned sideshow … welp, you’re wrong. Exhibit A — these Seattleites, who really DGAF.

Check out this wild scene that unfolded near the Space Needle Saturday night, where dozens of cars and even more people gathered in some sort of parking lot to burn rubber and send their whips into orbit, with spectators more than eager to gather around and watch.

Here’s the moment that Mustang driver hit those people as well as a car (pretty sure it’s a Nissan 350Z) pic.twitter.com/2Gb3z7EVdI

KOMO News reporter Cole Miller captured a good chunk of the action — including the moment a red Mustang (or maybe a Nissan 350Z) went flying into the crowd and took out a number of bodies as its donut got out of control. It literally glides into them, and hard.

What’s even crazier than that is the fact that the donuts continued — more cars filled the space and keep on revving … and strangely, the swaths of people don’t really disburse either. It seems like those who were hit might not have been seriously injured, and if they were … the others wanted to stick around and keep an eye on things. Then, a 2nd hit.

Here’s the clip of that second spectator collision pic.twitter.com/kuOl9oRa3o

You see another red sports car swerve into a guy and send him flying. Not even that was enough to break up the madness — what was enough, however, were cops … who eventually showed up, after wading through the pileup of cars blocking off the key participants.

Aaaaand here comes @SeattlePD. The white Camaro has a flat. Someone brought out a jack to swap the wheel out. And now a white truck is doing donuts. What an evening it’s been pic.twitter.com/VNp1sdUiTf

That sent folks scrambling, but Miller notes it wasn’t easy to get out of there. There was a major traffic jam as cops arrived. He also says the sideshow isn’t tied to protests happening in town either — they go down once or twice a month, especially in the summertime.

And, you thought the Bay Area was the only place wildin’ out like this … nope, not by a long shot.