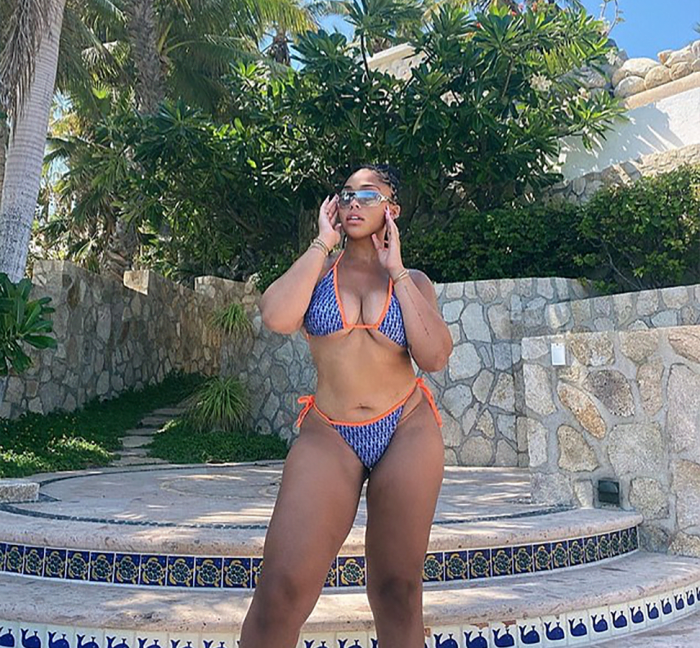 Jordan Woods is claiming that she has a better body that rival Kim Kardashian. And to prove it, Jordyn leaked pics of her wearing the exact same bikini as Kim.

Here’s the pic of Kim wearing the bikini:

LINK TO PIC OF KIM WEARING THE EXACT SAME BIKINI

Jordyn Woods is currently soaking up the sun this summer while traveling to all the hot beaches in Cabo, Mexico. Yesterday she decided that she wanted to go head-to-head with the most famous Kardashian, Kim. She wore the exact same Dior bikini that Kim wore on her last trip to Cabo.

This bikini costs $1300 and is sold out all over the world.

So who do you think rocked it better? Keep in mind, that Jordyn claims to have NEVER had any silicone introduced into her body:

NBA star Karl Anthony Towns has been dating socialite and social media star Jordyn Woods for almost a year now, as MTO News has been reporting.

But publicly Karl and Jordyn have been telling the media that they’re “just friends.”

Well, now the couple appears ready, to tell the truth and come out publicly as a twosome.

MTO News obtained a pic that Karl posted on his IG yesterday, where he was wishing Jordyn a happy birthday. The pic shows Karl grabbing on Jordyn’s butt.