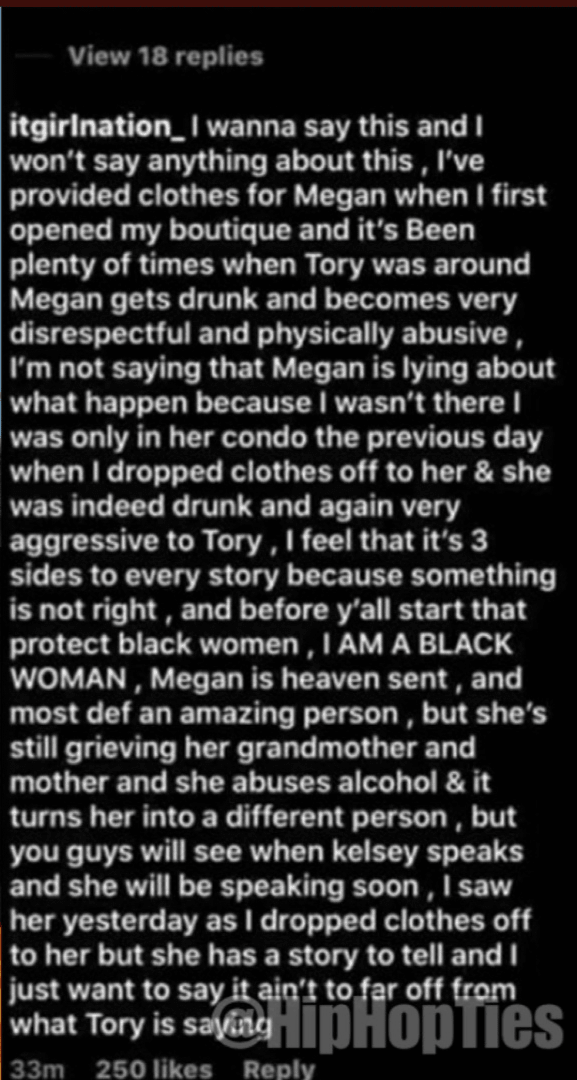 MTO News has learned that Megan Thee Stallion’s stylist, a woman who goes by the name _ItGirlNation, is the first person to publicly come out – and call Megan a LIAR.

She claims that Megan abuses alcohol and is physically abusive towards those around her. According to the stylist, Megan is still grieving – after losing her mother and her grandmother – and has turned to the BOTTLE for comfort.

The woman claims to have spoken to the only two other people on the scene of Megan’s alleged shooting and neither Kelsey or Tory shot Megan. MTO News uncovered comments on Instagram where the stylist told her followers, “Nobody shot Megan … they are protecting her by keeping quiet.”

The stylist first explained how she started working for Megan. She claims that she’s personally witnessed Megan abusing alcohol – and then behaving in an abusive manner towards Tory Lanez.

She claims that Meg’s former best friend Kelsey – who was also at the scene – will confirm her story:

Then she spoke specifically about Tory and Kelsey. She claims NEITHER shot Megan. Megan has accused Tory of shooting her in the foot – an accusation that Tory denies.

Others on social media have accused Kelsey of pulling the trigger, but she also denies those allegations.