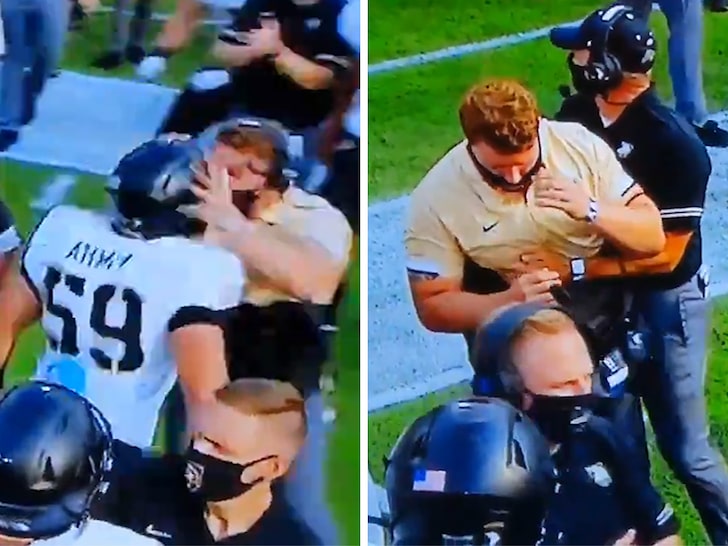 Being a little too rah-rah backfired immediately on a college football coach calling shots for the Army — he got headbutted by one of his own players … who still had their helmet on.

Indeed … ouch. This went down Saturday when a sideline coach tried congratulating an offensive lineman during a timeout, after the Army Black Knights got on the board against the Cincinnati Bearcats. This is something players often do to each other — the distinction being … both parties are usually still wearing helmets.

Unfortunately, this coach and lineman seemed to forget that. Check it out … coach comes up for some sorta embrace, but the OL must’ve thought he wanted to go noggin-to-noggin — ’cause he went head-first into the guy’s face, knocking him back and making him stumble.

The coach is visibly disoriented as he tries to regain his composure and others around him make sure he’s okay. Frankly, he might have suffered a concussion — it was a hard hit.

#59 out here trying to give his coach a concussion 😭😭😭😭 pic.twitter.com/BWAfL7uuWI

#59 definitely felt bad — you can see he stuck around too to see if his coach was alright. It’s unclear if he was treated for a head injury or not, or if he just shook it off. Either way, it’s a very healthy reminder that football can be dangerous … on and off the field, apparently.

BTW, bad juju might’ve been unleashed for the rest of the game … Army’s down by 14 points right now with just 5 minutes left in the game. Use your head, folks — just not like this.