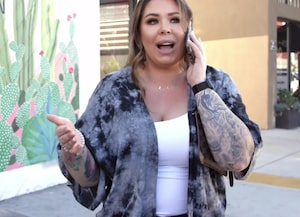 The mother-of-three said she wants her daughters to “know everything” about sex.

Leah Messer got candid about the first time she had sex.

On Tuesday’s episode of “Teen Mom 2,” the reality star revealed to her friend Kylie how young she was when she lost her virginity.

As for tackling the topic of sex education with her young girls, Leah said she would like them “to know everything and know what happens.”

Kylie chimed in and said, “But I think your atmosphere growing up was way different than their atmosphere. Yours was obviously not that great, so I don’t think that that’s something you have to worry about. But you’re right you have to let them know about things. Be honest with them.”

During a birthday party for the twins, Leah turned to her daughters and exclaimed, “You guys get to learn from my mistakes, right?”

“What do you mean I’ve made some big bad mistakes?” Leah retorted. “Getting pregnant at 17 wasn’t a mistake, it was a challenge. I didn’t know what the heck I was doing, but I made it work and look at us now.”