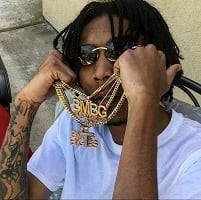 BandGang Jizzle P was involved in a shooting in Detroit yesterday and died, MTO News has confirmed. May he rest in peace.

Kizzle P, also known as BandGang AJ was a popular Detroit rapper, whose buzz was continuing to grow. Fans flocked into the rappers Instagarm last night to post their RIP’s.

The popular Detroit rapper who came up with the Bandgang crew was slain yesterday in his hometown. Sources claimed that Jizzle P was shot multiples times and was declared dead at the scene of the shooting.

A graphic video, which purportedly shows Kizzle P’s body, has been circulating on social media. In the interest of decency – we will not re-oost that video here.

The motive of the shooting is still not known yet, and police do not have any suspects in the shooting.

The rap group BandGang shared the news that BandGang AJ has passed on. Using their Facebook page they wrote Tonight We Lost 1 of Our Brothers BandGang 4L.

Here’s some of his music: