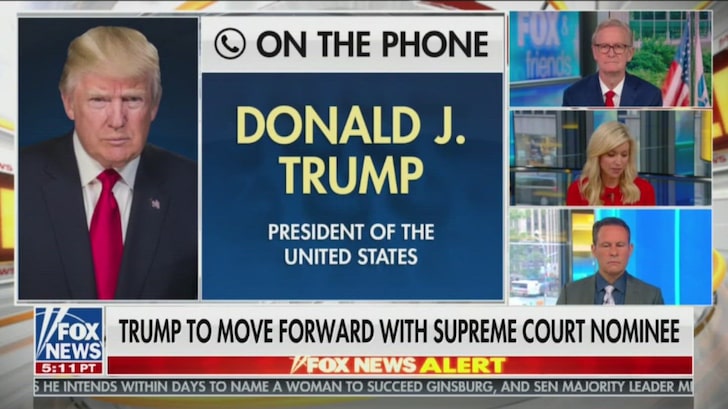 President Trump‘s suggesting Ruth Bader Ginsburg‘s dying wish to not be replaced until after the election isn’t real, but rather a political ploy whipped up by Democrats.

Trump made a routine pit stop on “Fox & Friends” Monday morning, and was asked about RBG telling her granddaughter — reportedly while on her death bed — that her wish is for the next elected President to choose her successor on the Supreme Court.

Trump says he doubts if Ginsburg — who died Friday due to complications of metastatic pancreatic cancer — actually said those words, and instead speculates the “dying wish” was written by either Rep. Adam Schiff, Sen. Chuck Schumer or Rep. Nancy Pelosi.

Ultimately, “maybe she did, and maybe she didn’t,” is the best Trump can offer as proof that RBG’s dying wish is illegitimate … and moved on to telling the Fox News crew he plans to move quickly in replacing her.

As we reported … Judge Amy Coney Barrett has emerged as a frontrunner to fill RBG’s vacant seat, which would give conservatives a 6-3 majority on the High Court.

It’s shaping up for a political war due to the precedent set during President Obama‘s final year in office — when Republicans blocked him from appointing Merrick Garland to SCOTUS. It’s pretty evident Trump doesn’t care about that … or RBG’s dying words.