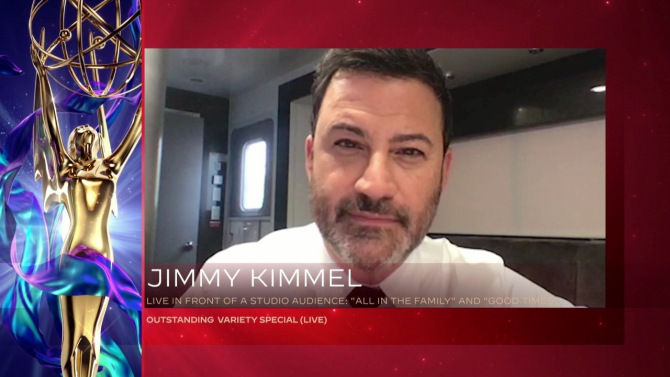 Those without cable (or a TV) may be wondering how to watch the Emmys 2020 online for free. Though the awards show celebrates the best of the best in television, it’s hard not to acknowledge that most viewers (a.k.a. millennials and Gen Z-ers) watch TV from the comfort of their computer screens.

But before we list some (free!) ways to watch the Emmys 2020 online, let’s break down the basic info viewers will need to know about this year’s first-ever virtual awards show.

Image: Invision for the Television Academy/AP.

“This will all depend on the comfort level of the people at the other end, but we’ve got to go and find them,” an Emmys producer told Variety. “They might be at home, they might be in the garden, might be in a hotel, they might be standing on the side of the street. It doesn’t really matter, wherever they feel comfortable. But we want to bring every nominee that we can logistically, live into the show.”

Another producer said, “There are people who are nominated who live in Los Angeles, who live in London, who live in Berlin and Tel Aviv, so we’re looking through all those all those questions and all those challenges and trying to figure it out. But again, that gets into what people’s comfort level is. Do you want someone ringing your doorbell? We’re coming up with a lot of interesting possible solutions. And one of the things that we’re working through in terms of the show is that everything doesn’t have to be the same. We want to have a lot of variation and experimentation within the show. Once you say the world is your studio, then you can do some inventive things.”

Who are the Emmys 2020 nominations?

The full list of the Emmys 2020 nominations can be read here, but here are some highlights. Surprises for the 2020 Emmys include Zendaya (who was nominated for her first Emmy for Outstanding Lead Actress in a Drama Series for Euphoria), Love Is Blind, Cheer and Ramy. The most nominated network was Netflix with 160 nods, whereas the most nominated drama was Ozark and Succession with 18 nominations each. The most nominated comedy (and show overall) was The Marvelous Mrs. Maisel, which received 20 nods.

How to watch the Emmys 2020 online

Both the Daytime Emmys and the Creative Arts Emmys were live streamed on the Television Academy’s YouTube channel. It’s unclear if the Primetime Emmys will do the same, but there are still a ton of free ways to watch the Emmys 2020 online. Thank goodness for free trials. Those ways include free trials for services like Hulu+ With Live TV, Sling, Fubo, Philo and AT&T TV Now. Each service provides a five to seven-day free trial (just remember to cancel it before it ends), which is more than enough time to watch the Emmys’ three-hour broadcast. Here are prices and info for each service.

Fubo TV: Sign into your Fubo TV account and scroll down to watch the Emmys on ABC. (Fubo TV offers a seven-day free trial and costs $44.99 a month.)

Hulu+ Live TV: Sign into your Hulu+ Live TV account and scroll down to the Emmys on ABC. (Hulu+ Live TV offers a seven-day free trial and costs $54.99 a month.)

Sling TV: Sign into your Sling TV account and scroll down to watch the Emmys on ABC. (Sling TV offers a seven-day free trial, and costs start at $20 a month.)

AT&T TV Now: Sign into your AT&T TV Now account and scroll down to watch the Emmys on ABC. (AT&T TV Now offers a seven-day free trial, and costs start at $55 a month.)

Philo TV: Sign into your Philo TV account and scroll down to watch the Emmys on ABC. (Philo TV offers a seven-day free trial, and costs $20 a month.)