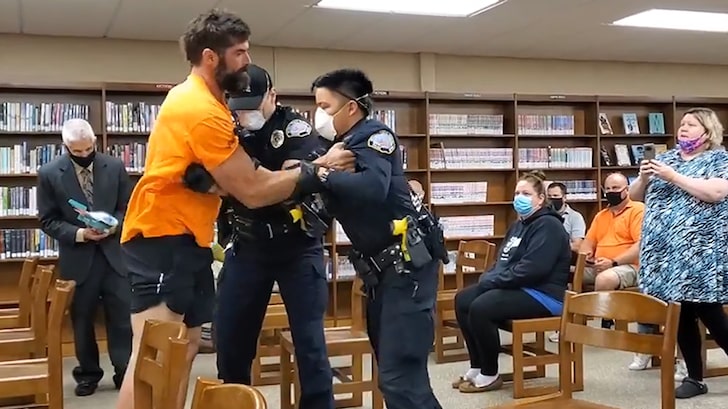 An anti-masker told police they would have to drag him out of a school board meeting before he would cover his face, and his wish came true … soon enough he was out on his keister.

Reed Bender took a stand Monday at the Mitchell Board of Education meeting in South Dakota, railing about why forcing people to wear masks is wrong in his eyes.

Superintendent Joe Graves tells TMZ … a mask mandate for anyone inside the school has been in place since July 13, and Bender’s raised several objections to wearing masks before … claiming they don’t work, and it’s a violation of his civil rights.

This time, the Superintendent told Bender he would call the cops if Reed didn’t put on a mask, and Bender dared him to do it, so he did. You’ll notice, Bender’s the only one in the library not wearing a mask.

Bender was NOT arrested even though he seemed to resist when cops dragged him away. There’s also a threat of a taser. See, police can show restraint when they want.

It’s pretty crazy … the Superintendant says it’s the first time he’s had to kick someone out of a board meeting in his 30-year career.

And people think the students are the big problem.