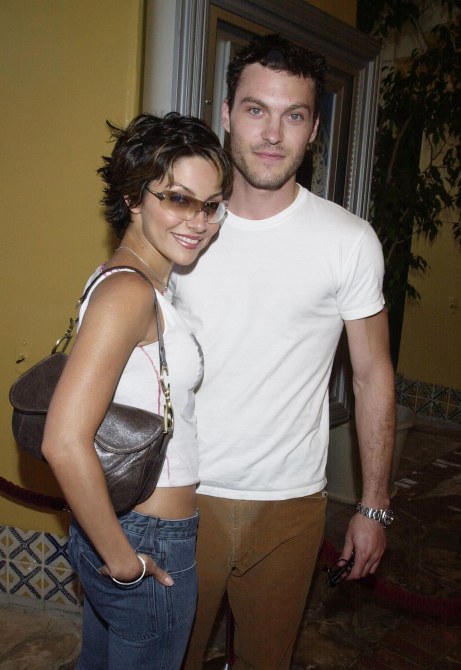 Team Megan. Brian Austin Green’s ex-fiancée Vanessa Marcil slammed him while supporting Megan Fox amid their divorce. Here’s what went down: Marcil, who dated Green for four years before they ended their engagement in 2003, took to her Instagram on Friday, September 11, to post a throwback of her and her ex when she was pregnant with their son, Kassius, who is now 18.

“Sept 11… I was pregnant with Kassius and headed to NYC. Kass’ dad was driving me to the airport. We received a call from Nana frantically saying “Is Vanessa already on her plane?” “Turn on the news” New Yorker’s lives changed forever… #nycneverforget 📸 by @kymberly_marciano,” she captioned the photo.

That’s when the responses rolled in. One user commented, “I think you still love Brian Austin Green” to which Marcil responded that she “never loved” him and was “always honest with him about that.”

Marcil went on to reference her and Green’s long-running custody battle over Kassius as the reason for their bad blood “That was part of his anger towards me and so the reason why he fought me for so long knowing it would hurt our son & change our son forever,” she wrote. “I did however feel sorry for him. I still do. He’s a very angry/sad human being who still has too much shame to take full responsibility for his actions as a father. I consciously knew that I could work through childhood traumas through him and I have. I have great empathy towards him and other people who are still in pain from their childhoods.”

She continued, “[Kassius] loves him unconditionally and I am very proud of that fact. I celebrate Kass’ love for his father and remain extremely grateful that My son was finally invited back into his dad’s life and was able to finally meet his youngest brother and finally see his other two siblings again. My son is also an incredible big brother [to Green’s children with Fox].”

When a user asked if the estranged relationship between Green and Cassius was because of “Megan or Brian,” Marcil responded, “It’s a biological father’s responsibility to see his child.”

Marcil also opened up about shy she decided to “speak [her] truth.” She wrote, “As a woman I have been bullied into silence out of fear of losing my son. Once I realized that HE was now feeling that HE had to keep family secrets for us I knew it was time for change. I will take the heat to that HE can now live free.”

Along with her comment, Marcil also took to her Instagram Story to support Fox amid her divorce from Green. The Beverly Hills, 90210 star confirmed in May that he and the Jennifer’s Body actress—whom he shares three sons with, Noah, 7, Bodhi, 6, and Journey, 4—separated after almost 10 years of marriage at the end of 2019.