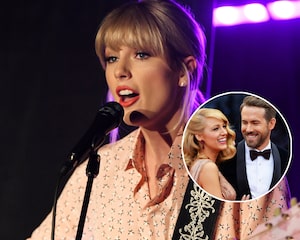 “I named all the characters in this story after my friend’s kids, and I hope you like it!”

While introducing her song “Betty” on Country Radio, the pop star shared the meaning behind the track, revealing that the names mentioned in the song are those of her friend’s children.

Swift, 30, said she wrote “Betty” through the eyes of a teenage boy.

“He lost the love of his life, basically, and doesn’t understand how to get it back,” she explained in the radio clip, which was captured by Swifties on Twitter. “I think we all have these situations in our lives where we learn to really, really give a heartfelt apology for the first time.”

“Everyone makes mistakes, everybody really messes up sometimes. This is a song that I wrote from the perspective of a 17-year-old boy,” she continued. “And I’ve always loved that in music you can kind of slip into different identifies and you can sing from other people’s perspectives, and that’s what I did in this one.”

Swift then added, “I named all the characters in this story after my friend’s kids, and I hope you like it!”

After the singer released her new album “Folklore” on July 24, fans began speculating that Swift had revealed Lively and Reynolds’ daughter’s name in the album’s song, “Betty.”

In the track, three characters are mentioned — Betty, James and Inez. Swift is good friends with Lively and Reynolds, who also share daughters James, 5, and Inez, 3.

“You heard the rumors from Inez / You can’t believe a word she says,” Swift can be heard singing in the chorus. In the bridge, the lyrics read, “I was walking home on broken cobblestones / Just thinking of you when she pulled up like / A figment of my worst intentions / She said ‘James, get in, let’s drive.'”

The couple’s third daughter was born in October. However, Lively and Reynolds have yet to publicly announce the baby’s moniker — and it looks like now they don’t have to.