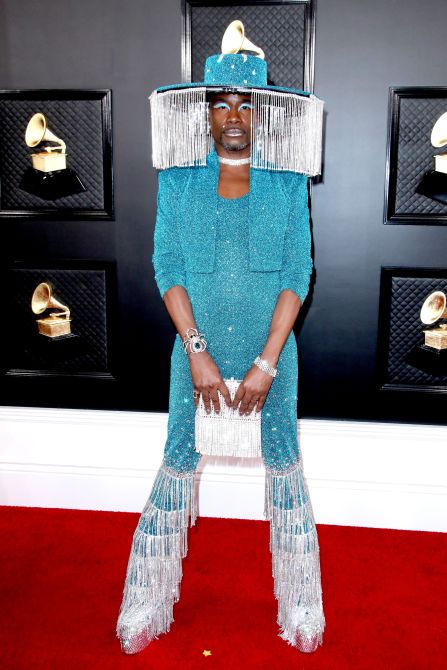 The decline of societal gender norms when it comes to fashion has been a long time coming—and we’re still not all the way there. The progress we have made in embracing personal style regardless of identity has definitely been thanks to gay and queer fashion icons who have pushed—and continue to push— the boundaries. Although celebrations for queer fashion trailblazers are often reserved for Pride, we should celebrate these style icons every single day. Considering many of their looks are part of history, often worn in updated ways even decades later, it only makes sense to carve out a part of our everyday lives to pay a bit of homage to how far we’ve come. Let’s take a trip down the rainbow-paved memory lane, shall we?

From Freddie Mercury and his jaw-dropping stage ensembles to Laverne Cox and her ethereal red carpet looks, there’s certainly no shortage of incredible fashion from queer icons. As the LGBTQ+ community becomes more mainstream—in a good way!—and queer celebrities continue to defy gender norms, we no longer have to search high and low for fashion inspiration of all kinds. Masculine and feminine? Don’t know them! Fashion and style know no gender or sexual orientation—and the 17 queer style icons below are proof.

Take a few moments to feast your eyes on some of the most incredibly well-dressed members of the LGBTQ+ community throughout history. Whether it’s Kristen Stewart and her impeccable sense of style (and constantly-changing hairstyles) or Billy Porter’s effortless ability to one-up himself with each and every ensemble, you’re sure to gain some serious inspiration from these stars. Just don’t blame us if suddenly everything in your closet looks subpar in comparison! Remember, these queer celebrities were blessed with good taste, but they also have access to stylists and high-end designers, too. So be kind to yourself (and your wardrobe), and enjoy these 17 swoon-worthy looks in no particular order.

Whether it’s gorgeous gowns overflowing with tulle or custom designer red carpet looks, Billy Porter is never one to shy away from a bold fashion moment. The Pose star has been blessing us with incredible style for a while, but the past few years have really brought Porter into the spotlight—and for that, we are eternally grateful. Give this man all the awards.

Sarah Paulson is consistently blessing us with incredible looks both on and off screen. And while her TV characters are often queer style icons themselves (I’m obviously referring to some of her American Horror Story looks.) Paulson is definitely a style maven IRL. She often switches between the classic masculine and feminine aesthetics—occasionally throwing in some edge as well—so what she wears is almost always a fun surprise.

One of the most refreshing aspects of Janelle Monáe’s style is that it’s so specific to her. Whether she’s wearing an outfit reminiscent of a train conductor during Paris Fashion Week or dressed to the nines in a stunning gown for a red carpet event, each look is completely and utterly Janelle Monáe.

As the lead singer of the band Queen, Freddie Mercury was always going to stand out—and that’s with his voice alone. In addition, though, the singer chose to don some incredibly wild ensembles which pushed fashion forward into a new age. The 1970s and ’80s were prime years for rock, and the stage allowed Freddie Mercury to wear some of the most memorable looks in music (and fashion) history.

Laverne Cox is elegance personified. Every single one of her red carpet ensembles looks so effortlessly beautiful that it’s not hard not to be inspired by the actress’ sense of style. Cox also often uses her fashion to make a political statement—like she did at the 2019 Emmys. In the case of Laverne Cox, activism and fashion are a match made in heaven.

We all know RuPaul Charles for his incredible drag looks, but the host and performer always comes to slay no matter the event. Even when not in drag, RuPaul takes the fashion world seriously and blesses us with colorful suits and incredibly fun looks. Plus, who can forget the fact that his glasses are always on-point? We certainly can’t.

Another rock god who defied gendered fashion norms was—of course!!—David Bowie. While the singer had several different styles during his active years, one of the most famous was his Ziggy Stardust persona. With wild jumpsuits and colorful on-stage outfits, bright hair and a lightning bolt on his face, it’s hard to deny the impact Bowie had on the ’70s and ’80s fashion scene.

Kristen Stewart’s style evolution is truly one for the ages. The transition from Bella in the Twilight series to Sabina Wilson in Charlie’s Angels was definitely a big one in terms of fictional characters—but Stewart has had a similar transition in her fashion choices. In the past few years, the actress has come into her own and developed a truly unique—and hot!!—sense of style. From her iconic Fashion Week looks to her impeccable street style, Kristen Stewart is undeniably a queer fashion legend.

As the resident style expert on Netflix’s Queer Eye, Tan France is obviously a fashion icon. Not only has he reminded the world the wonders of a French tuck (!!), but France also has a wonderful sense of style himself. The reality host can go from cool and casual looks to stunning formal looks with ease, and both suit him incredibly well. Watch out, world. Tan France might just be running the fashion game some day.

After showing up to myriad red carpet events looking *chef’s kiss,* and even posing for Louis Vuitton’s Pre-Fall 2019 lookbook, there was no escaping the fact that Indya Moore has a place in the fashion world. Their style is ever-changing—from suits with no shirt underneath to gorgeous gowns that serve as optical illusions. If you know what’s good for you, you’ll keep an eye on one Indya Moore.

Hayley Kiyoko is basically the Justin Bieber of lesbians. There’s no denying the fact that she has incredible vocals, stage presence and a fuck boy attitude that translates perfectly into being a pop star. Plus, the singer has developed her own incredible sense of style that brings bits of masculinity, femininity, color and bold patterns together effortlessly.

Marlene Dietrich, who started her acting career in 1919, was one of Hollywood’s first queer fashion icons. She was an expert on fashion—She loved Dior!—and broke some major barriers with her androgynous film roles. Dietrich herself would often don menswear along with her other luxe fashion looks, and almost always wore a hat, no matter the ensemble. Although, according to an interview with The Observer in 1960, Dietrich said if it were up to her, she’d wear men’s jeans all the time. Iconic.

The combination of Jonathan Van Ness’ long, flowing locks and incredible sense of style is what makes him a stand-out fashion favorite. The Queer Eye star consistently breaks through gender norms with his ensembles and steps out in some truly gorgeous looks. Whether it’s a mini dress and heels or a stunning suit, Jonathan Van Ness can do it all.

They’ve been in the public eye since starring as Rue in The Hunger Games, and since then, they’ve blessed us with some stunning ensembles. Amandla Stenberg has truly come into their own in the last few years, and we love to see it. Whether it’s wearing corset overalls on the red carpet (Yeah, they did that) or slaying denim-on-denim looks, Stenberg is certainly a queer fashion icon on the rise.

Although Ezra Miller has always clearly had an eye for fashion, he’s truly blossomed in the past few years. After showing up to the 2019 Met Gala in a trippy—but oh-so-cool—look and going wild with pattern mixing at an Urban Decay event, Miller has shown he’s playing by no one’s rules.

While Lena Waithe has always shown up to events wearing the sleekest suits known to man, she was put on the fashion radar with her unforgettable rainbow cape at the 2018 Met Gala. Since then, all eyes have (rightfully) been on her—and she does not disappoint. Waithe is constantly finding new ways to make suiting unique, and we’re happy to be along for the ride.

Of course, this wouldn’t be a queer fashion icons round-up without Sir Elton John. Since making his debut in the 1960s, the singer has had a career filled with incredible ensembles—whether on stage or off. From colorful suits to outlandish costumes, Elton John is one of the most legendary fashion icons of all time. High-key, we’re just trying to get our sunglasses collections to up to par with his. We’ll see how it goes.