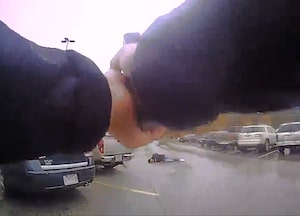 “I guess you’ve just been waiting all day to shoot some Black people, huh?”

A tense standoff between a white gunman and four black motorcyclists has been captured on cellphone.

Footage shows the man aiming a semi-automatic rifle at the heads of the four friends, accusing them of trespassing.

The incident, posted on Reddit, occurred on Sunday in Virginia, just an hour outside Charlottesville.

“Here is the video for everybody to see. It isn’t edited in any way,” the poster wrote.

“Myself, 3 other friends on bikes and one in a car were riding around on Sunday, June 14. We pulled into the neighborhood where 3 of the guys grew up and stopped at the cul-de-sac to stretch and plan our route home”

“This guy came walking down his driveway with his weapon aimed at us the entire time.”

Motorcyclists threatened by man with rifle. (Story in comments) from r/PublicFreakout

Despite explaining to the man that some of the group used to live in the neighborhood, and that there was no visible signs marking the so-called private property, he never once drops the rifle.

“You think I’m f–king with you? You feeling me? I’m gonna take you out here,” he can be heard threatening.

The men decide to call the police, with one asking the armed man if he minds them doing so: “I ain’t trying to get this man trigger happy,” he tells his friend.

“I guess you’ve just been waiting all day to shoot some black people, huh?” they ask him.

When one of the bikers asks if he’s going to point the gun at the cops if they arrive and they are black, he replies: “The cops here are good people.”

They even ask the man for the exact address to tell the police, but he doesn’t oblige, opting instead to keep the weapon trained on them for more than five minutes.

“Y’all gonna get locked up when the cops get here… for tresspassin,” he says once more before the video cuts out, as the friends decide it’s best to leave.

According to the poster, the gunman was the one who got arrested, on five counts of brandishing a firearm.

“Police were called and he has been arrested for brandishing,” he wrote.

“Be careful out there. Its a crazy world we live in.”