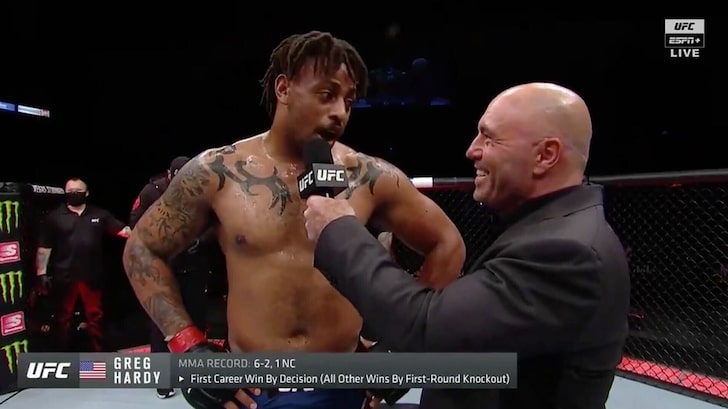 Greg Hardy says UFC’s “no crowd” rule at UFC 249 was a “game changer” — because he could hear the TV announcers critiquing him during his fight … and he adjusted accordingly to get the victory!

Hardy (6-2) was fighting Yorgan De Castro (6-1) in a heavyweight bout Saturday night — with Hardy taking some serious leg kicks early in the match.

Daniel Cormier — who’s doing the announcing with Joe Rogan — had said during the broadcast that Hardy needed figure out a way to check those heavy kicks before they took a real toll on his body.

Of course, Cormier — one of the greatest UFC fighters of all time — was talking to the audience at home … but since you can hear a pin drop in the arena thanks to the COVID-19 safety protocol, Hardy could listen too!

AND HE WAS PAYING ATTENTION!!!

Hardy ended up winning the match by unanimous decision — and during the post fight interview, he gave all the credit to D.C.

“Thank God for not having the crowd,” Hardy said … “Shout out to D.C.”

“I heard him tell me to check him, that I needed to figure out how to check it  … so I started trying to check him! Game changer!”

Of course, De Castro could presumably also hear Cormier — maybe he should have listened up, too!!