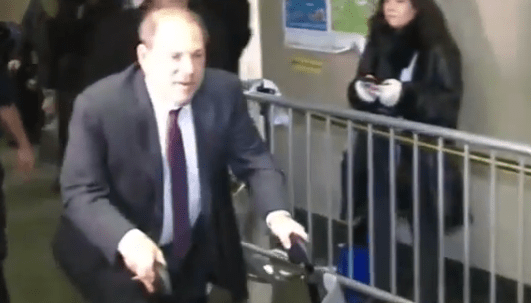 Harvey Weinstein’s attorney’s are trying every trick in the book to get the disgraced director a shorter sentence — and now they reckon that his health is so poor that he would not survive five years in prison.

“The grave reality is that Mr. Weinstein may not even outlive that term,” the attorneys wrote in a letter to New York Supreme Court Justice James Burke per Page Six.

“Mr. Weinstein was constantly maligned by the media, having long since been convicted in the court of public opinion,” they wrote.

“His fall from grace has been historic, perhaps unmatched in the age of social media.

“The trial did not fairly portray who he is as a person,” they wrote, adding that “His life story, his accomplishments, and struggles are simply remarkable and should not be disregarded in total because of a jury’s verdict.”

Throughout the trial, he used a zimmer frame to move around. Once the verdict was given, Weinstein immediately ditched the walker, leading many to believe that his poorly disposition was all just an act.