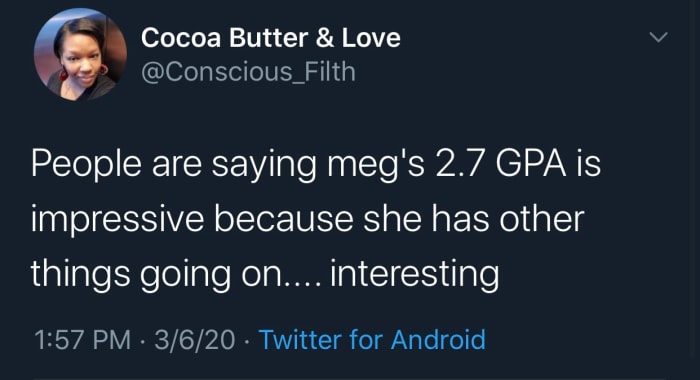 Megan Thee Stallion released her new album Suga yesterday, and it’s getting rave reviews from her fans and followers on social media.

But MTO News has learned that one of her lyrics is causing the beautiful female rapper top get dragged.

In a new song, Megan admits to fans that she has a 2.7 grade point average. Megan is currently attending Texas Southern University and majoring in health administration, where she is a third year student.

Megan has a busy schedule, so she rarely attends class in person, but she claims that she does her homework online, and takes her all her tests.

MTO News has confirmed that some of her fans are dragging her on Twitter, for appearing top “brag” about her 2.7 GPA. For those not aware, a 2.7 G.P.A is the equivalent of a C+.

Here are some of the folks dragging Meg on Twitter: