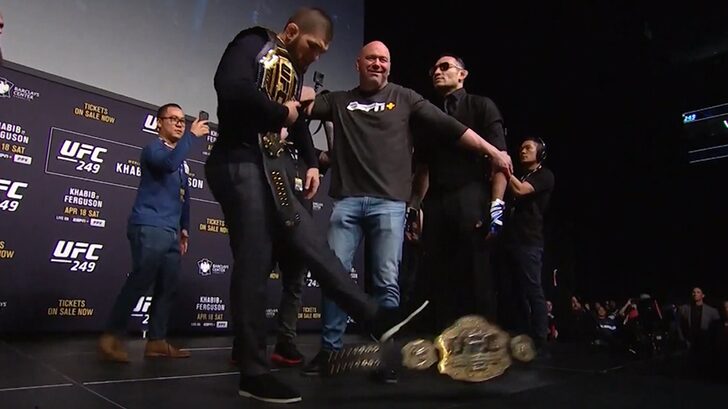 THE DISRESPECT IS REAL!!!!

Khabib Nurmagomedov straight up KICKED Tony Ferguson‘s interim UFC lightweight championship belt during an intense face-off Friday … and it got VERY close to getting violent.

Khabib and Tony were doing a media event to promote their upcoming brawl at UFC 249 in April … and the trash talk got VERY personal.

Tony trashed Khabib as a weak-minded, scared, fake brawler … and Khabib fired back by calling Tony a “fake Mexican,” since Tony was born and raised in California.

Tony was offended by the comments — claiming he’s a proud American AND a proud Mexican.

But, when it came time to square off for their face-to-face photo op, Tony laid his belt on the ground, seemingly challenging Khabib to do something … and Khabib reacted by kicking the belt.

Tony eventually picked up the belt and accused Khabib of disrespecting the UFC — claiming Khabib doesn’t really care about the company.

Sure, this may have been over-the-top to generate buzz (mission accomplished) but it seems like the rivalry is very real … and they both can’t wait to get in the Octagon and settle things once and for all!!!