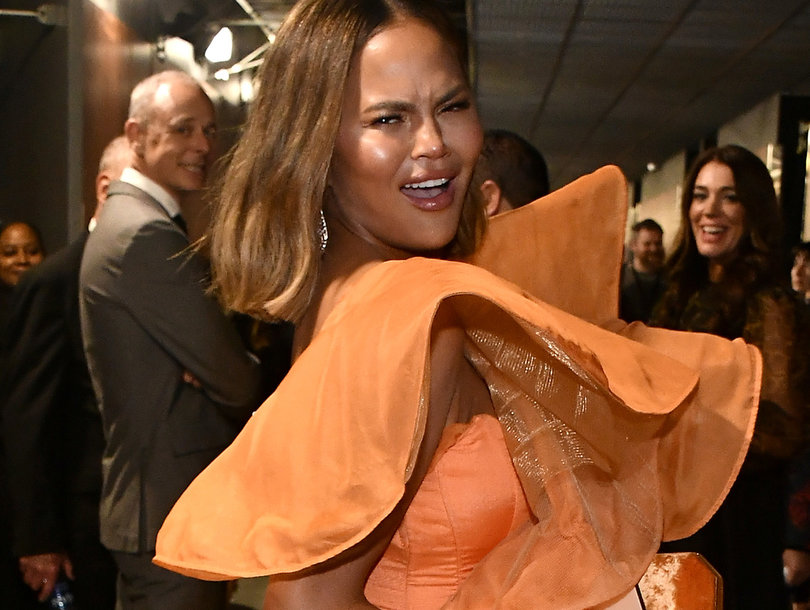 Chrissy Teigen has come clean, speaking for the first time about undergoing plastic surgery early in her modeling career.

It’s surprising that she hasn’t revealed this before, considering how candid and outspoken she is about virtually everything in her life, but it turns out the former model went under the knife for a very specific reason when she was about 20 years old.

“I did my boobs,” she told Glamour UK. “It was more for a swimsuit thing. I thought, if I’m going to be posing, laid on my back, I want them to be perky!”

Unfortunately what made sense more than a decade ago for her career isn’t so practical now that she’s a mother of two and no longer actively working as a model. On top of that, she’s a mother of two which means she’s been pregnant twice. And that means her body has undergone dramatic changes twice already, and in both cases those changes impacted her breasts.

“You have babies and they fill up with milk and deflate and now I am screwed,” she said candidly.

“I think you’re supposed to replace [implants] every ten years,” Chrissy continued. “But when you have kids you think about [the risks] of surgery and I think, ‘This is not the way I want to die, in boob surgery.'”

Now she’s ready to do something altogether different, telling the outlet, “I want them out now.” Instead, she added, “If I could do one thing, it would be to have a lift.”

When asked if it was a self-confidence thing, Chrissy said that she didn’t even get the breast augmentation to increase her bust size, and in fact she didn’t go bigger at all.

“I kept them the same cup size. I just filled them out, so they are rounder and firmer,” she explained. “I had a quarter ‘teardrop’ cup in the bottom and filled out the breast line.”

Having children brought about another change for Chrissy’s relationship with her body, and this one she definitely sees as more positive.

“I used to weigh myself every morning, afternoon and night. I knew what the scales would say after each meal,” she said. “I did that for eight years and had this one weight I wanted to be at.”

It all changed when she had Luna, her daughter with John Legend, and then again with Miles. “It took me a year to be comfortable with my new normal number.”

The beauty of this is that rather than chase some number she equates with beauty and self-worth, Chrissy is embracing the body she’s in and so long as she’s taking care of it and it’s healthy, learning to love it. What a great relationship to have with one’s body.