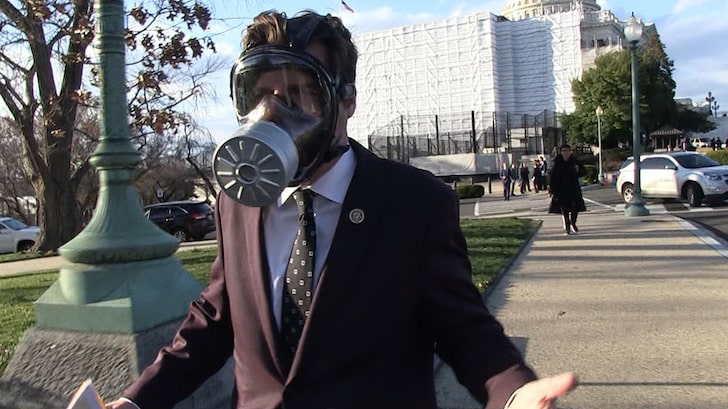 Rep. Matt Gaetz is taking a better safe than sorry approach to coronavirus — even when he’s just voting on it — ’cause he’s got himself a gas mask on that could fight off the plague.

The FL Congressman was strolling in D.C. Wednesday shortly after meeting up with his House colleagues to vote on a new bill for emergency coronavirus funds — $8.3 bil was ultimately greenlit, BTW. Back to him though — he came in looking like this, left in it too.

As for whether he’s taking things a little too seriously — or not — Gaetz says we’re in dire times right now, and as a politician — he’s the most at risk.

Our camera guy asks if he thinks President Trump should get himself one of these high-tech masks, and MG jokes he doesn’t think DT would go for it. And not for the reason you might expect either. Remember, The Donald is a huge germophobe (who apparently hasn’t touched his face in weeks because of COVID-19). He’s also a huge hairdo guy too.

Trump: “I haven’t touched my face in weeks. I miss it.”

As for whether would-be partiers should stay away from Gaetz’s home state of Florida for this upcoming Spring Break — check it out … he encourages them to come out and rage.

There might be a cure in all the imbibing they’re bound to do … according to him, anyway.