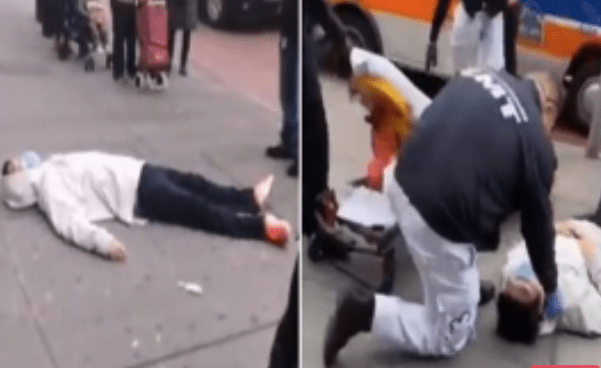 An Asian man wearing a surgical mask passed out yesterday in the middle of a crowded street in Queens. The man was rushed to the hospital, where according to social media reports, he is believed to have died.

The man’s cause of death has not yet been determined, but plenty of people suspect that he may have died of the coronavirus.

Here is the video, of the man laid out on a crowded street.

The incident occurred in Flushing Queens, an area of the city filled with Chinese immigrants.

According to reports, a man was walking down the street, when he was suddenly overcome with a bought of coughing. He collapsed onto the floor, and after a few seconds, he stopped moving.

As the video shows, officers quickly arrived on the scene, but they seemed unwilling to physically assist the man.

New York City has been facing a rise in racism against Asian Americans since the coronavirus outbreak.

Here is the video, of the man laid out on a crowded street.