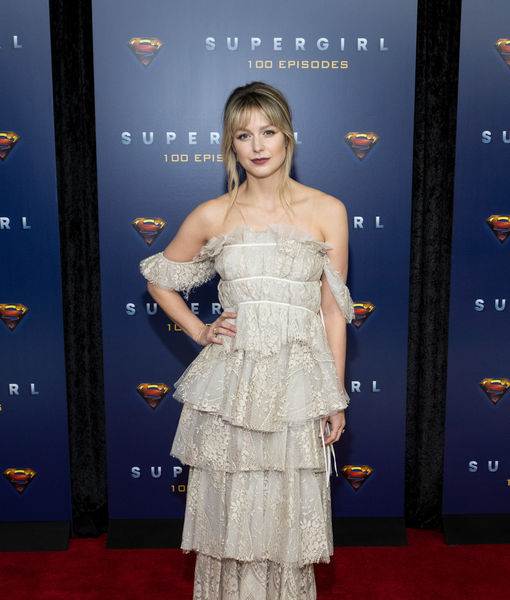 “Supergirl” stars Melissa Benoist and Chris Wood, both 31, have a baby on the way!

On Wednesday, Melissa announced the big news, writing on Instagram, “A non-canine child is coming to our family very soon!!! 😱😆😭 @christophrwood has always been an old dad by nature but now he’s going to be a real one.”

Melissa also shared a photo of herself holding an infant top while Chris carries one of their dogs.

Chris shared another photo of his fake baby bump, writing on Instagram, “The photo is a joke but the news is real…!!! 👶🏻🍼🤗.”

In December, Melissa and Chris attended “Supergirl’s” 100th episode celebration, where she showed no signs of being pregnant.

The news comes just six months after Melissa and Chris tied the knot at a private estate in Ojai, California.

A source told E! News, “It was a beautiful setting for a wedding, very peaceful and quiet. The vows were brief and lasted about 15 minutes. There was lots of cheering and applause as it ended.”
As for the reception, the insider shared, “It looked like an elegant outdoor dinner party. There was a lot of laughter and happiness.”
The source added, “There were lots of glowing candles and lights strung above. The food was served family style and everyone passed the dishes back and forth.”

Some of the wedding guests to attend include Kevin Smith, Odette Annable and Paul Wesley.

The pair had been dating since March 2017. Romance rumors started swirling after they photographed kissing during a vacation in Cancun.

At the time, a source told E! News, “They didn’t appear to care who watched their passionate embraces.”