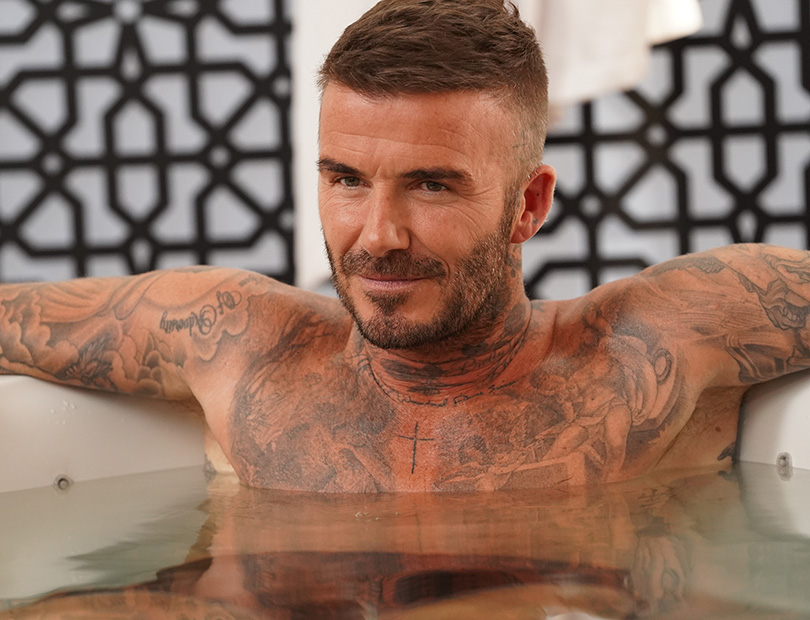 Usually it’s somebody from Ellen DeGeneres’ team in a costume crouched inside her box just waiting for their cue to surprise her unwitting guests. This time, it was Justin Bieber, who had to endure more than five minutes of David Beckham’s interview before he could finally break free.

While we didn’t get Ellen’s favorite slow motion replay, we still love that Justin popped out to scare the crap out of David only after David had been saying such nice things about him.

It turns out David scored some major dad points with his kids over Halloween when one of them discovered that Justin was giving out sno-cones over at his house.

And that was all it took, the family took the short trek over to Justin’s house and enjoyed sno-cone chasers after what he described as “far too much candy” to wrap up their Halloween festivities.

And then, to wrap up his interview, Justin erupted from the box with a shout … and then a quick apology and a hug. He just couldn’t commit fully to the scream-and-run, so he modified it to the scream-apologize-hug-and-then-run. Good enough.

And even after, David had nothing but kind things to say about the singer, relating how kind Justin had always been to his kids and how happy he was to have Justin back doing what he loves best with new music.

Earlier in the interview, Justin got to crouch in that box and hear how David came to guest star as himself in an episode of “Modern Family” earlier this year. As they say in so much of the business and entertainment world, it’s all about who you know.

“I’ve become friends with Eric [Stonestreet] from going to the Kings games and he mentioned it to me a few weeks before,” David said of the possible role, which proved not too much of a stretch for the soccer star. “I played myself, so it wasn’t that difficult.”

He also got to work alongside sitcom vet Courteney Cox, who was also portraying herself, and a cast who’ve been together over a decade, so there was plenty of great guidance to help him get through, and he did just fine.

Still, David assured Ellen that though he’s a “massive fan” of the show, he has “no aspiration of becoming any kind of actor.”

In a recurring segment of the show, Ellen trots out five random people and looks at a list of five random secrets from their lives. It’s one secret per person, so her job is to assign the right secret to the right person.

To round out this special edition, she brought back out Justin Bieber and the man who first discovered him, Usher. This meant the audience would get a chance to learn one juicy secret about each of them.

The secrets were as follows:

Hilariously, Ellen was so confident that she could do this, even as Usher started getting into her head. And yet, round after round she never got more than two secrets attached to the right person. Of course, she’s only told how many she’s got right and not which ones are right, so it’s not always helpful intel.

In the end, she had to give up, as she apparently couldn’t quite believe that Justin had once broken into a school.

As for Usher, he kept her off the trail for quite awhile, and almost had her convinced he was the one who watches every Hallmark movie (at one point, she gave that one to Justin as well), before finally revealing that he’d had a cute childhood nickname almost as adorable as the one Justin confessed he and Hailey share on Tuesday’s Burning Questions.