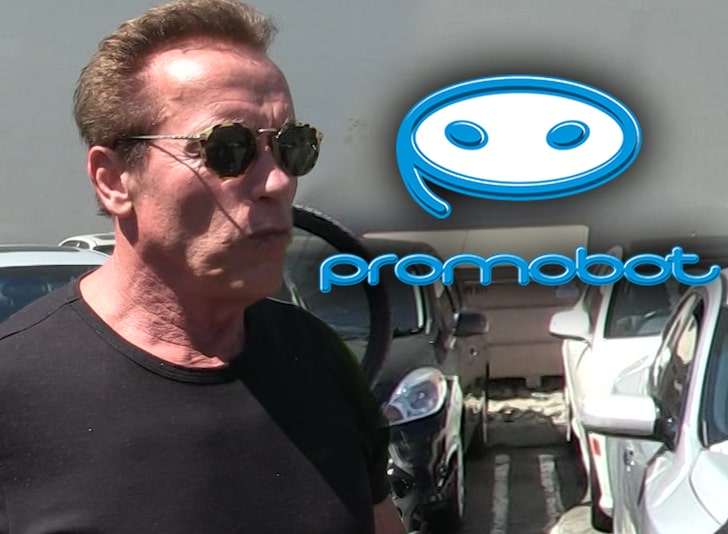 Arnold Schwarzenegger‘s famous mug and iconic voice are being ripped-off by a Russian robot manufacturer, and he wants more than $10 million to make it right … or for the robot to go hasta la vista.

Arnold’s company is suing Promobot, which makes autonomous service robots consumers can customize to look human. The product’s called the Android Robo-C, and can be made to look like a person of your choosing.

.@Schwarzenegger’s creepy robot figure wants to be your friend! Arnold you down to be friends with it? pic.twitter.com/8ULXeFPbGq

The problem — according to the suit — Arnold did not give permission to Promobot to use HIS likeness to promote it, and is generally very strict about his face being used for ads because “such activity diminishes his hard-earned and well-deserved reputation as a major motion picture star.” However, according to the lawsuit … he’s become the “unwilling face” of the product.

Arnold’s company claims Promobot is using the Arnold-like model at public events to promote and market the Android Robo-C. Even more egregiously … Promobot allegedly asked Arnold to pose for a photo with its robot while he was in St. Petersberg to deliver a speech in 2019 … and he refused.

However, according to the suit, Promobot kept using the Arnold android … including at CES in Vegas in January. At that point, Arnold’s attorney — legal pit bull Marty Singer — fired off a cease and desist letter to the robot company demanding it stop.

Singer made it clear to Promobot … he’s won cases like this in the past, including scoring a judgment for more than $2.5 mil for Priscilla Presley, who’s “far less commercially valuable” than Schwarzenegger. In fact, Arnold says he would not have accepted anything less than $10 million for using his likeness.

Promobot allegedly assured Arnold’s team it would cease using the Arnold-bot … it popped up again at the New York Toy Fair at the end of February. Hence, a lawsuit’s now been filed for misappropriation of Arnold’s right of publicity.

Schwarzenegger’s company not only wants an injunction blocking Promobot from using his face and voice, but is also seeking $10 mil, any profits made off the Arnold-bot … plus punitive damages and attorneys’ fees.