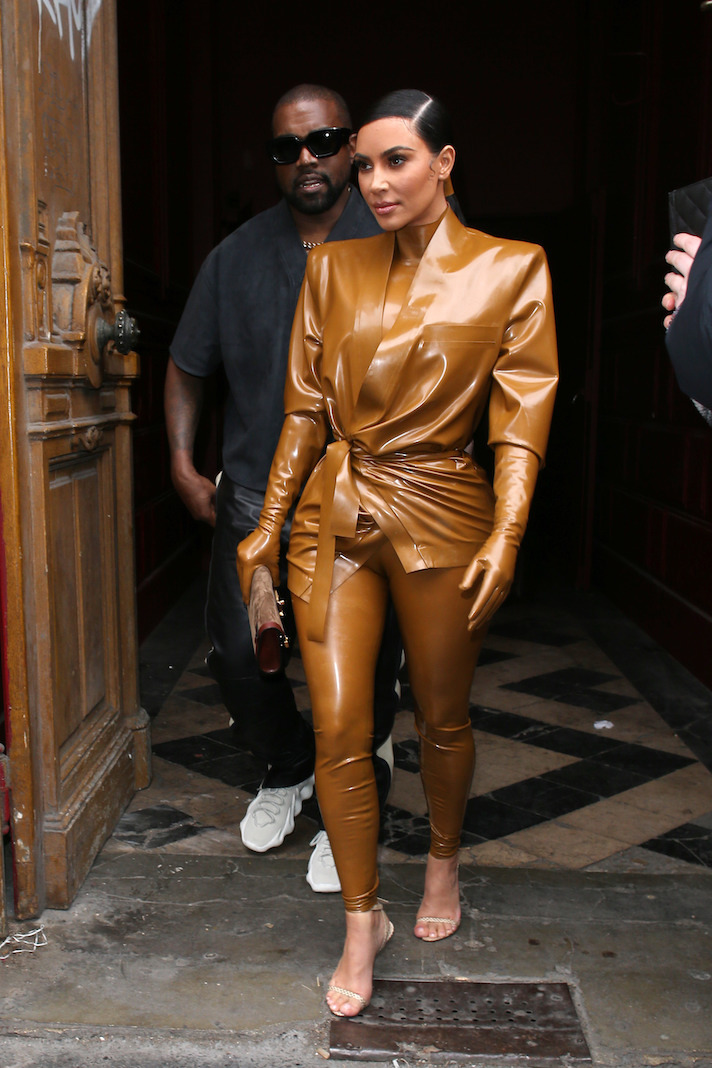 If anyone is the queen of surprises, it’s Kim Kardashian-West. After she suddenly decided to go to law school and work on the justice system, I thought surely the Kardashian sister could never top that. And while I seem to have been right on that front, Kim Kardashian’s Paris Fashion Week latex outfits have just appeared to make me question everything. While attending PFW Fall/Winter 2020, the celeb stepped out in three different latex outfits all in the same day. Sure, it’s no suddenly-becoming-a-lawyer, but it’s still pretty damn surprising—even for a Kardashian.

While I can’t say that I’m totally shocked that Kim Kardashian chose to wear three different latex looks in the span of 24 hours, I can say that I’m totally into it. The Kardashian/Jenner clan consistently wears skin-tight ensembles, so seeing Kim in a head-to-toe latex number isn’t that wild. The most interesting part of this series of looks is that she wore three versions of basically the same outfit in a singular day. The closest I’ve ever come to that was changing from a sleep t-shirt to a work-from-home t-shirt and then into a going-to-a-movie t-shirt. In other words, not close at all.

After attending a Sunday service, Kim Kardashian and Kanye West stepped out on the London streets. Kim was wearing an almost-gold Balmain look from the designer’s Fall/Winter 2020 collection. (And yes, that’s the collection that was just debuted on the runway. Ah, the life of a Kardashian.)

Later, Kim Kardashian switched to another Balmain ensemble which is also from the Fall/Winter 2020 collection. This time, the celeb opted for a dark brown version. Both the gold-ish Balmain outfit were paired with boots on the runway, but Kim Kardashian chose open-toed sandals instead—a bold move in Parisian winter.

But, because two of the same outfit just wasn’t enough, Kim Kardashian stepped out in one more Balmain catsuit. Opting for a dusty pink this time—my personal favorite—the star hung out around Paris with her daughter North West. (If I saw my mom in one of these latex looks, I think I’d scream—but I assume North West is used to it.) I can only wonder, though, if she wore a fourth latex look to bed. I guess we’ll never know.