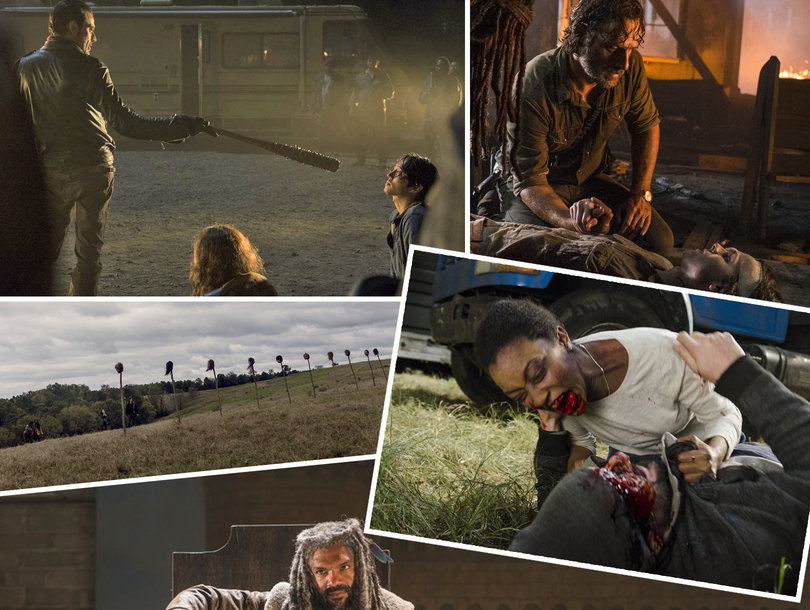 Beta brought destruction to Alexandria on Sunday’s new episode of “The Walking Dead,” which also gave us a brutal fight between Daryl and Alpha, a briefly bloodthirsty Gabriel and Gamma hoping for retribution.

What it didn’t give us, however, was an answer to whether Connie and Magna are still alive after the cave collapse in the midseason premiere. While we’re fairly certain both characters didn’t perish in the explosion, here’s hoping the show doesn’t take too long to answer that question.

Daryl clearly wants to know what happened to them too, having gone out on his own to try and find another way into the cave system. On his search, he happened upon Alpha, leading to one helluva fight. Alpha slashed Daryl up good and dug a knife in his leg, while he plunged a tree branch into her shoulder.

Much blood was oozed.

The two retreated to a nearby gas station, tending to their wounds in separate corners of the shop while Alpha sicked her army of walkers on Daryl one-by-one. As they each bled out, someone finally came to their — or at least Daryl’s — rescue: Lydia.

After leaving Alexandria following Carol’s betrayal, Lydia had apparently been watching both the Survivors and the Whisperers, trying to decide where to go. As her mother pled for Lydia to put her out of her misery and take her place as leader, Lydia refused. She then made a choice, going with the “human” side and not Alpha’s “perfect” army.

So, in a frustrating move, Lydia didn’t kill her mom, tie her up or even incapacitate her. Instead, she got Daryl out of there and just left Alpha to bleed out … which, of course, she didn’t. She’ll be back, strong as ever next week, we’re sure.

While all this was going on, all hell was breaking loose in Alexandria.

Knowing she was totally screwed with the Whisperers for leaking intel on the location of the horde, Gamma showed up outside the gates, begging for sanctuary. To try and gain their trust, she told them how everyone was trapped in a cave nearby and revealed it was her sister’s baby who they were taking care of in town.

Though she claimed she didn’t know about Danta, who had just killed Siddiq only a few days ago, she was still locked up. While in the cell, she confessed to killing her sister for Alpha, before giving the Alexandrians intel on where the cave was located.

Gabriel saw this as a sign that they “broke her,” believing they can do the same to other Whisperers if they’re taken in alive. He then started talking about pulling teeth and chopping off fingers to get information out of them, leading everyone else to react like “WTF???” Rosita also directly called him out for being “erratic.”

Judith then began speaking with Gamma through the prison window, just like she did with Negan. And, like Negan, Gamma began opening up. She spoke about how a series of “bad decisions” led them to Alpha, who could simply decide things for them. Judith told her she just “met the wrong person first,” and things would be different had she linked up with Rick or Michonne.

Gamma’s allegiance was put to the test when Beta showed up in the middle of town, having traveled through a tunnel Dante apparently dug from Alexandria’s cemetery into the outside world. He immediately went on a killing spree, conveniently missing all the main characters and turning a bunch of extras into walkers.

He then went to get Gamma from jail, where she made it clear she was no longer afraid of Beta and would not be returning to Alpha. Laura tried to fight him off but was, seemingly, killed in the process. She did, however, distract Beta long enough for Gamma to make a run for the Grimes’ home to hide out there.

As Beta refused to let up, Gamma — knowing Alpha wanted her alive — first threatened to kill herself if he kept harming Alexandrians. She then agreed to leave with him if he stopped his attack. They were ambushed by Gabriel and a small army outside the city walls, however, and Beta booked it.

So Gamma ended in the same place she began, surrounded by Alexandrians, hoping for mercy. At least now, they appear to trust her a little more. The episode ended with Aaron returning to town and saying “most of” them made it out of the cave. He, Rosita, Judith, RJ and Gracie then made the trip to Hilltop, taking Beta — who is now going by her actual name, Mary — with them.