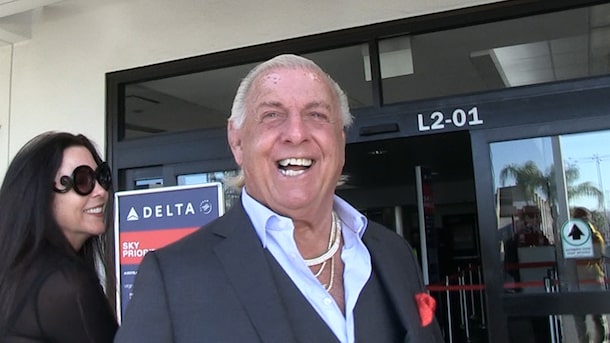 Ric Flair says a wrestling match between his daughter, Charlotte Flair, and The Rock‘s daughter, Simone Johnson, would be freakin’ AWESOME … and it could happen!!

TMZ Sports talked to Flair at LAX … and while the wrestling legend told us he hadn’t given much thought to a Charlotte vs. Simone match, he says the women most definitely have — and it’d be huge.

“I have not [thought about it], but I’m sure it’s crossed their mind. They can see it down the road. It would be phenomenal!”

There’s a big gap between the women… 33-year-old Charlotte has been with WWE since 2012 and is one of the biggest stars in the game.

But, Simone just started wrestling, so Ric says it’s impossible to say exactly how good she’ll be — but she’s got a major advantage — The Rock’s her dad.

“I haven’t seen her wrestle yet, so it’s hard to predict. She’s got his genetics and she’s got determination. I know that she’s been dying to do this.”

Charlotte vs. Simone would be epic … ’cause well, remember Ric vs. The Rock in 2002?

And, speaking of getting into the wrestling game, we also asked Flair if Tyson Fury had a future in the WWE … and let’s just say, Vince McMahon better be ready to write a big-ass check.