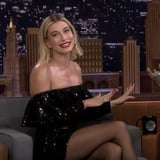 Hailey and Justin Bieber seem to have a rock-solid relationship, and they have beer bottles to partially thank for that. On Friday, Hailey stopped by The Tonight Show Starring Jimmy Fallon to chat about their romance and revealed that her previous appearance on the talk show helped rekindle her bond with Justin. She recalled showing her beer bottle party trick on The Tonight Show in April 2018 (in case you’re wondering, she can open drinks with her teeth) and said “a certain someone” reached out to commend her skills after the episode aired. “I’m now married to that certain someone,” she said. We doubt Hailey expected to tie the knot with Justin only five months after cracking open the Coronas, but things clearly worked out! Watch the clip above to find out what Justin said to Hailey after seeing her trick.