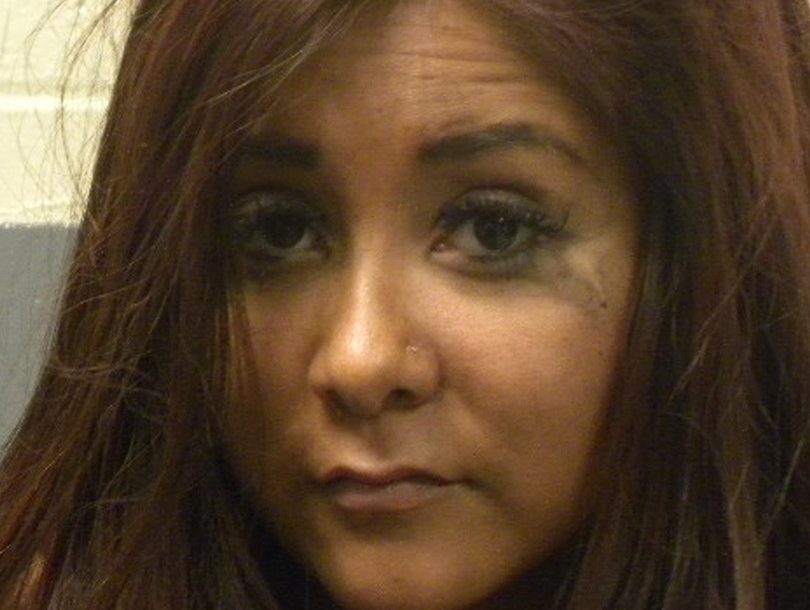 The midseason premiere of “Jersey Shore: Family Vacation” was filled with drunk shenanigans, a sexually tense wrestling match, a rap battle, a close call with an ice cream truck driver and a new “note.”

The group thought Mike “The Situation” Sorrentino was a day away from his prison release, so they decided to sleep over Jenni “JWoww” Farley’s house so they could all be together to see him. Unfortunately, Mike was kept behind bars until the very last day of his sentence, but his friends decided to make the best of their time.

They FaceTimed Lauren Sorrentino and invited her to go bowling with them. She agreed, and they had a great time — until they almost got kicked out of the alley for throwing themselves onto the lanes.

After a few rounds, Nicole “Snooki” Polizzi, Deena Cortese, Angelina Pivarnick, Pauly D and Vinny Guadagnino decided to go to the strip club next door. Snooki was hammered and got up on the pole before twerking on a trashcan, while Deena shouted into the mic behind the DJ booth, “Free Sitch! Don’t be a bitch!” Eventually, they decided to go home. (Note: Nicole said she didn’t remember being at the strip club.)

Once at the house, Angelina said she wasn’t tired and proceeded to wrestle (playfully) with Vinny. The tussle lasted for so long that the show’s security guards actually showed up! Of course, no one was hurt, but Vinny decided to put an end to the match by farting on Angelina. Pauly watched the whole thing and said it was all a result of “sexual tension.”

“This is how people on Staten Island end up pregnant!” he joked.

The next day while drinking by Jenni’s pool, Angelina challenged Vinny to a rap battle, because of course. They retreated to their separate quarters to write down bars in their phones, and we must say, they were better than we expected! Vinny took shots at Angelina’s numerous engagements, while Angelina said Vinny was a bore in bed.

To the group’s excitement, an ice cream truck pulled up to Jenni’s house. After running out to pick their favorite pops, the clan rushed back inside — forgetting to pay the man. But as Pauly pointed out, ice cream truck drivers in Jersey are “gangsters,” so the man pulled his truck up onto Jenni’s driveway and blasted his music as loudly as possible.

The girls gathered up the cash and brought it to him, but he said they were short. “Take your f–king money,” Angelina shouted, tossing the money into the truck. He was livid. “Are you f–king kidding me?!” he fired back. “One of you better come to work!”

When Jenni got wind of what was happening, JWoww came out to play.

“This guy is gonna get an upside-down twisted [inaudible] because you picked the wrong f–king day ’cause our friend wasn’t out of jail, and then you’re gonna sit on my f–king driveway like the f–king chooch that you are with your blaring f–king music? I’m about to slash your f–king tires and have the cops escort you off my f–king property. Just because I have a nice house doesn’t mean I was raised here, bitch. We can take this to the f–king street.”

And this was just in her confessional.

Once outside, JWoww clapped in the man’s face and told him he had five seconds to get off her property. His response: “F–k you. Pay me.” The man just wanted his $27. As Angelina came out with the extra cash, Jenni ripped it out of her hand. Now, it was about principle. “You guys make enough!” he shouted at the girls.

Jenni claimed he was “making up prices” and urged him to “suck my dick” several times. Eventually, she threw the money at him. “You want the change?” he asked. “No!” she shouted back.

At dinner that night, Angelina said she liked wrestling with Vinny because she likes rough sex. Shocked, the boys asked her for more details, leading her to reveal, “I f–king slap Chris! I’m on top of him, and I’m like, ‘Yeah, motherf–ker!’ Pshhh.” She said he loved it.

Angelina and Vinny spent the whole dinner basically gazing into each other’s eyes, making the others feel as though they were crashing their date.

The boys dipped out early the next day, but because it wouldn’t be a proper “Jersey Shore” sleepover without some sort of prank, they left Jenni — the OG “note” author — a new note.

“Dear Jenni,” Pauly said aloud as Vinny wrote. “Thank you for the hospitality. Make sure you wash the sheets because Vinny keto farts in his sleep. P.S. Sorry Ronnie clogged the toilet. Call the plumber.” They signed it: “the boys.”

“I don’t think Jenni’s ever letting us stay here again,” Vinny pointed out. Ronnie concurred. “Nope,” he said. “Definitely not.”

At the end of the episode, cameras captured the sweet phone call Mike made to his wife on day 239 of 240 of his sentence. She answered the last call she’d receive from an inmate at Otisville Federal Correctional Institution.

“Hi, honeys!” he shouted excitedly into the phone. “It’s happening!”

“I’ve been waiting for this phone call for a long time,” replied Lauren, who was smiling ear to ear.

On January 15, 2019, Sorrentino surrendered himself to the Otisville Federal Correctional Institution to begin his eight-month prison sentence for tax evasion. He was released on September 12, 2019 at 8:10 a.m. EST.