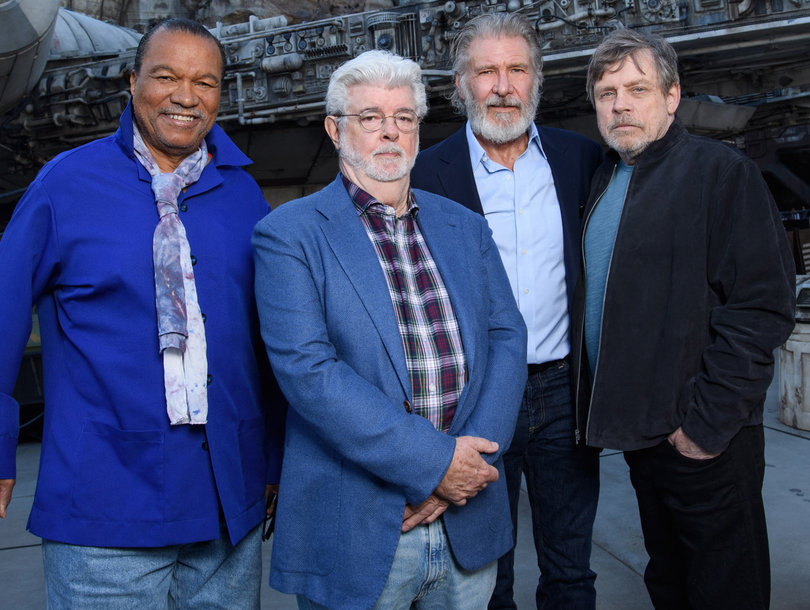 Taking a note from its own “Legends” legacy, formerly known as the “Expanded Universe,” Lucasfilm made a big announcement about the future of “Star Wars” as the franchise looks to open up a whole new era for exploration.

“Star Wars: The High Republic” is the over-arching banner for this new era, which is set to take place two centuries before the Skywalker saga. In other words, these stories take place just long enough before the feature films that almost none of those characters will be born yet — except for Yoda, of course.

Much like “Star Wars” lore has been broken into eras, like the Old Republic and Empire eras, these tales take place in what’s being called the High Republic era, and it’s one fans have not yet had a chance to explore. And the studio is going all in on this launch, treating it as a major initiative for them complete with a promotional trailer.

Filled with concept art and descriptions of some of the characters and cataclysms that will propel readers into this new era, the writers and developers themselves catch fans up on what they’ve been doing to bring this ambitious project together.

That’s not common at all common for something that is currently expected to take place entirely across novels and comic book series (published by Disney-owned Marvel Comics and IDW Publishing, who handle Marvel’s young-reader books), so it’s a testament to how important this is for Disney.

Many fans jaded by the loss of so much of the “Expanded Universe” to the “Legacy” shift might just be lured in to see what writers can do in the new “Star Wars” Universe without being beholden to anything happening on television or film. Certainly we got some incredible stories during the renaissance era of original “Star Wars” fiction kicked off by Timothy Zahn’s original Thrawn trilogy and Dark Horse’s incredible “Dark Empire” mini-series.

Michael Siglain, creative director of Lucasfilm, describes the High Republic as “a golden time. A time of peace and prosperity…a time when the Jedi really are galactic guardians, stewards of peace and justice.”

The story kicks off in August with “Light of the Jedi,” a book written by novelist and comic book writer Charles Soule that hits shelves on August 25. This is an era where Jedi are not generals in war, but more like Texas rangers or Knights of the Round Table. And the cataclysmic event they must converge to deal with is something called “The Great Disaster.”

“You see a lot of Jedi coming together to handle it,” he said. And this “disaster” is the catalyst for the entire saga built from it, including new villains the Nihil — inspired by Vikings — who are as unlike Stormtroopers as the developers of this project could possibly make it.

Check out the breakdown of the “Phase 1” projects below (more phases are expected to follow as the story expands and evolves):

“‘Star Wars: The High Republic’ will allow creators to imagine entirely original stories in a new corner of the galaxy,” said Siglain, who said that this is a “new era for the franchise that begins with publishing.” That certainly seems to hint that stories set in “The High Republic” have the potential to move into other mediums like television, film or even video games.

It looks like “Star Wars” is going to follow the Marvel Cinematic Universe’s lead and test out storylines in the much cheaper publishing arena before investing millions to bring them to life for any screen. Fans have certainly been clamoring for years to see adaptations or expansions of written “Star Wars” material, particularly the aforementioned Thrawn saga.

James Waugh, vice president of franchise content and strategy, says as much in the teaser video for “The High Republic” in talking about their post-Skywalker strategy. “What if publishing was more of an incubation place [where we] bring in great talent and just let their imaginations run free,” he said.

And so that’s exactly what they did, bringing in a who’s who of “Star Wars” writers and handing them a truly blank slate to try and come up with what they would collaboratively like to explore. Their starting point was a line Obi-Wan Kenobi said in the first film: “For over a thousand generations, the Jedi Knights have been guardians of peace and justice.”

The question was, what does that look like? What is this era? How does it stand out from what we’ve seen before. And the mark that kick-started the whole thing: “What scares the Jedi?”

We’ll all find out when “Light of the Jedi” kicks of the High Republic Era for “Star Wars” on August 25.