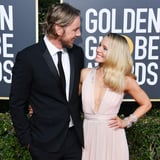 Kristen Bell and Dax Shepard know first-hand that sending the wrong text message can get you into some pretty awkward situations. During an appearance on The Ellen DeGeneres Show on Tuesday, The Good Place actress recounted the time her husband of over six years accidentally flirted with her mother. It all started when Kristin’s mom sent Dax a text about an upcoming visit. After giving him the details about her arrival and adding that she couldn’t wait to see him, Dax meant to respond with a smiley face but ended up sending a rather sexual emoji instead. Thankfully, Kristen’s mom had no idea what the eggplant emoji actually stood for. Watch Kristen detail the hilarious story above.