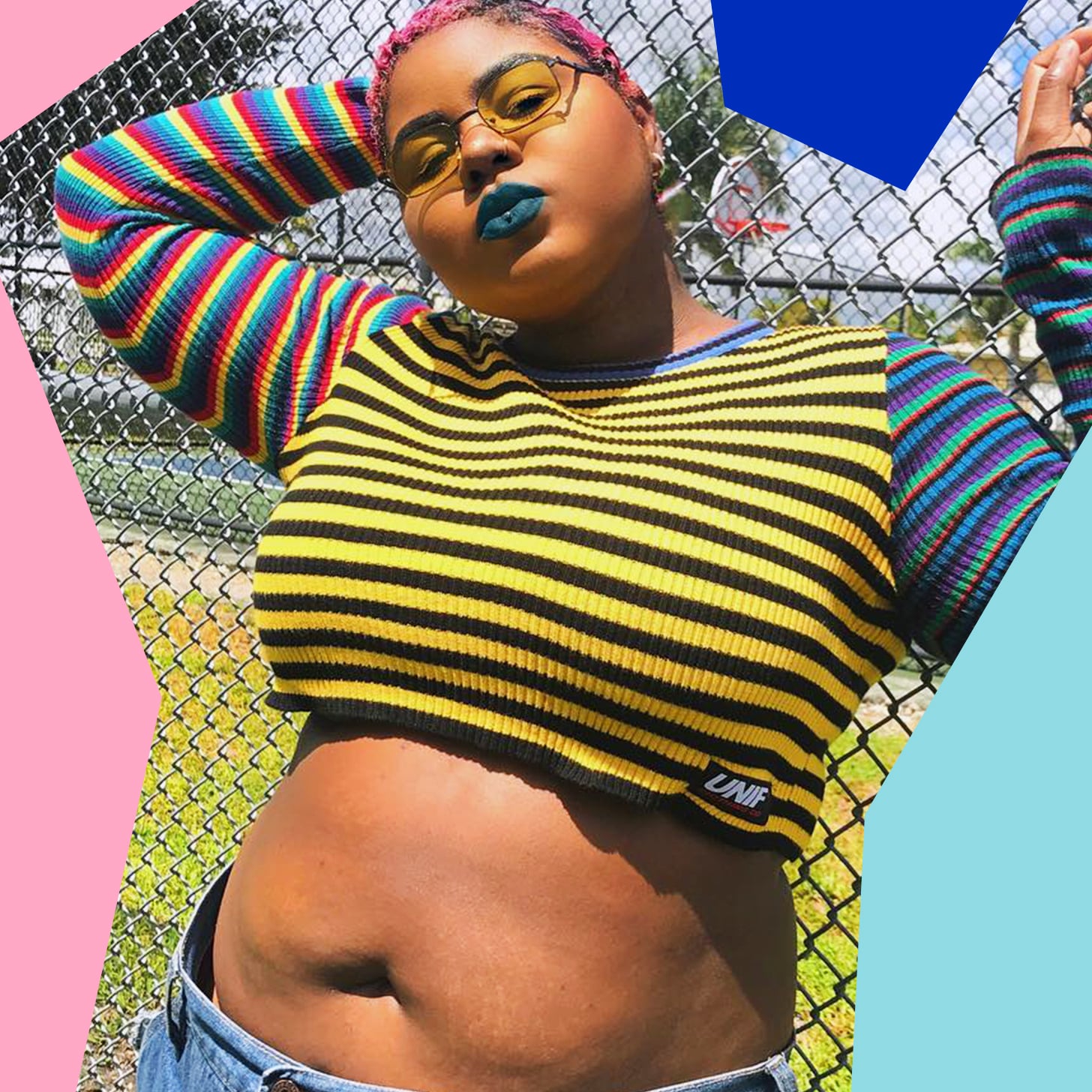 Unlike many of the models at the show, 29-year-old Stacey hadn’t gone to the casting auditions (there was a hurricane) and she hadn’t been submitted by a modeling agency (she’s never been offered representation). And still, Rihanna had handpicked her, Stacey marveled, “saggy tits,” dark acne scars, and all. She’d never even seen anyone with a body like hers wearing what she considered to be stylish outfits until she stumbled across Gabifresh’s blog back in 2010.

“I had been unhappy with myself and my body for my entire life,” she told POPSUGAR. This discovery motivated Stacey to explore her own personal style and, in 2013, share it with the world via Tumblr, where snapshots of her modeling her first-ever bikini and debuting alternative blue locks would soon go viral. Her journey into social media stardom had officially begun.

We spoke with Stacey about how she cultivated a beauty and lifestyle brand true to her evolving self, overcame imposter syndrome at the Savage x Fenty show, and evolved her life-long insecurities into strengths.

On Growing to Love Fashion

“Growing up, fashion was not accessible to me. My friends would come to the States and get cute clothes designed for a 12-year-old and I would want that, but I couldn’t fit them. There was no option for my size. So, my mother would buy me clothes from the adult women’s section and I would look matronly. When you’re 12, that’s not what you want.

“It was a struggle. I couldn’t even look at myself naked.”

Because of all that, I didn’t have a real interest in personal fashion at the time. I wore hoodies all throughout college. I would invent all kinds of excuses to not go to the beach or pool because I couldn’t find any swimsuits that fit me. There was also the matter of my boobs. I really had to go through a process of accepting them and finding clothes that could flatter them. It was a struggle. I couldn’t even look at myself naked. When I moved from my hometown of Port-au-Prince, Haïti to the United States in 2010, I was still unhappy with myself and became very, very depressed. Then one night, I found GabiFresh’s blog. It was so impactful to see someone in my age range who was also bigger looking stylish. I thought there must be options for me, so I’m going to try to find those options. If she can do it, then I can do it too.

So I went to Forever21, ASOS, and ModCloth to find things that would allow me to be comfortable, like my body more, and make me feel confident. I also decided to go natural and play with color. I wore my hair blue for a number of years. As for my personal style, I started experimenting to learn what I liked and didn’t like. I didn’t care about what could flatter my body type anymore. If I liked it then I would wear it. It all happened in the little steps, but the few changes that I went through, they emboldened me to take bigger steps.”

On Social Media Expectations Versus Reality

“I started posting pictures of my outfits on Tumblr in 2013 and went viral quite a bit the following year. Then in 2015, my followers encouraged to me to share my photos on Instagram, so I created an account to showcase my outfits and my makeup looks. About a year or two later, neon makeup was trending and I absolutely loved it. I also worked at Sephora at the time, so I would play with new makeup and showcase my skills by using bold colors and creating unconventional looks.

At some point, I noticed my followers had expectations. If I didn’t post something crazy, something bright pink or yellow, rainbows or a blinding highlight, then people wouldn’t interact with my content. I felt obligated because I wanted that interaction, but that wasn’t something I wanted to do all the time. So I kind of grew out of that mentality around 2018. It was a process, learning about myself and what made me comfortable. People are multifaceted. We grow, evolve. I still love color, but I realized I can explore color in more abstract ways, you know? Like a shade of blue applied from my eyes to my cheeks to my temple, something that’s more editorial, you know? That’s been my vibe lately.”

On Walking in the Savage x Fenty Show

“I was thrifting one day when I got an email saying that Rihanna had personally requested that I be in the Savage X Fenty show. I screamed! Then I checked the casting company because it was unreal to me. Soon after that, they wanted me to fly to a precasting, but a hurricane struck Miami and there weren’t any flights to New York. I cried and absolutely lost my mind because I wanted it so much. I thought, ‘Well, it’s over.’ But a week before the show, the team told me I had to go to New York the next day for a fitting and rehearsal and everything.

“I want to see more opportunities for bigger fat people who are Black and dark-skinned and don’t necessarily have perfect skin.”

I made it to New York, and every single day I’d wake up, go to a fitting, and then rehearsal. Even then, I was still thinking, ‘Well, tomorrow they’re going to tell you you’re not in the show anymore.’ By that point in my life, I had really lost hope that anyone would give me a chance. Even though a lot of brands claim inclusivity and diversity, they kind of stop at a specific body shape for fat people and a specific size, too. I thought I just wasn’t good enough to be a model. Plus, I’ve had acne since I was 13, and so my acne scars and hyperpigmentation also made me self-sabotage my pursuit of modeling. But then this happened. It still gives me chills.

Honestly, I think I was disassociating throughout the whole show. I don’t think I was in my body because I didn’t know how to feel. I didn’t know what to think. I was in a show with great people, people I admire. I met my heroes, like Paloma Elsesser. Watching the whole production from beginning to end and being involved and being seen. . . it was just incredible. I want to see more opportunities for bigger fat people who are Black and dark skinned and don’t necessarily have perfect skin. I want to see more of us in high fashion. This experience convinced me that a modeling career is possible, and what a way to start!”

On Embracing Her Chipped Tooth

“When I was nine years old I banged my head — it wasn’t that painful, but I chipped a tooth. I got it repaired. It happened again accidentally when I was about 15, and I got it repaired again. Then when I was 26, I was just eating chicken and it happened again, but that time I couldn’t get it fixed because it was expensive and I did not have dental insurance. It was very hard because I was functioning as an adult. I had to go to work. People were seeing me in public. And so I changed how I smiled, how I spoke; I changed everything. I was very much in control of my facial muscles at all times. Then, at some point last year, I decided, you know what? I don’t care! It’s not that serious. It’s not important. I also realized that nobody cared that my tooth was chipped. A lot of times people don’t even notice until I pointed it out, so that enabled me to stop caring myself.

But when you are a public figure on the internet, people expect perfection, so I was still pretty afraid to show my tooth in that space. It stressed me out — like if I had a sponsorship and the brand wanted me to speak on video, I would figure out a way to do so without showing my top teeth because I did not want that to show. I also wanted to pursue modeling, and my chipped tooth inhibited me from putting myself out there more. I would pass up opportunities because I thought, ‘Well, they’re going to reject me anyway.’ I wouldn’t even allow myself the chance to get rejected for a gig because in my head I was rejecting myself. My chipped tooth was the last thing that I had to get past. So last year, I posted a photo to basically expose myself, and people took it very well. Some even reached out to me, thanking me for being vulnerable and transparent, because they also had a chipped tooth and felt seen. And then I went on to be chosen by Rihanna. So there’s that.”

On Being Soft and Vulnerable

“Growing up, I wasn’t encouraged to acknowledge my feelings or embrace vulnerability or self-love. I just started doing it now in my twenties. I was always there to support people and friends, people, but I did not allow myself to be soft or to let other people see how soft I really was. To me, being soft made you weak, so there was always some kind of shield or armor around me. I encourage people to be soft, to be compassionate with yourself, and to allow yourself to feel whatever it is you’re feeling in the moment. Emotions are not weakness. Feelings are not weakness. We are meant to feel. We’re people. I am always evolving. And even though I have a moderate amount of followers on Instagram, it’s still my safe space to evolve and transform and that’s not ever going to change. I tried to to please people and that did not work. But I’m constantly evolving and I can’t wait to see my final transformation.”