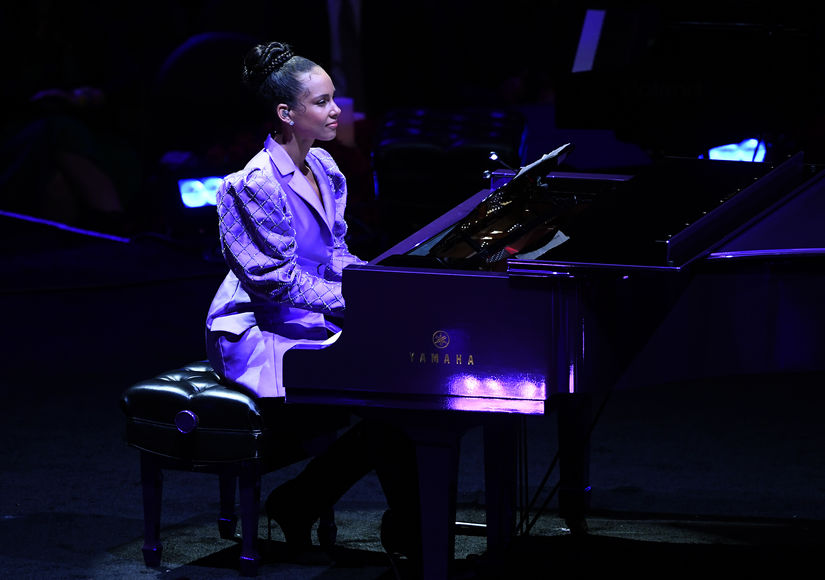 On Monday morning, many gathered at Staples Center in L.A. to pay their respects to basketball legend Kobe Bryant, who perished in a helicopter in Calabasas with his daughter Gianna and seven others.

The memorial began by acknowledging the other victims: John, Keri and Alyssa Altobelli; Sarah and Payton Chester; Christina Mauser; and pilot Ara Zobayan.

Then, Beyoncé kicked off the memorial by performing her songs “XO” and “Halo.” Before singing “XO,” she said, “I’m here because I love Kobe and this one of his favorite songs.”

During the service, Bryant was remembered through videos and photos from his NBA career as Maroon 5’s song “Memories” played.

The cameras panned to Kobe’s wife Vanessa, who was visibly heartbroken as she sat next to their daughter Natalia.

Jimmy Kimmel joked that he was the “wrong person” to gild everyone through the tough memorial. Fighting back tears, Jimmy said, “It is a sad day… I’m honored to be asked to speak here… I don’t think anyone could imagine this.”

Encouraging people to hug those around them, he added, “I’ve been trying to come up with something positive. It was hard… The best thing I was able to come up with… gratitude.”

Kimmel introduced Vanessa, who took a deep breath as she took the stage. She told the crowd, “Thank you so much for being here. It means so much… I’d like to talk about Kobe and Gigi. I’d like to start with my baby girl…”

She remembered her 13-year-old as an “amazingly sweet and gentle soul” and “one of my best friends.” Vanessa recalled fondly how her daughter was always sure to kiss her good night and good morning, even if Vanessa was asleep.

She said she had her mother’s fire, personality and smile, but that she was “competitive like her daddy.”

She went on to look ahead to all the milestones they would miss, saying, “We will not see Gigi go to high school… we didn’t get a chance to teach her how to drive a car… I won’t be able to tell her how gorgeous she looks on her wedding day… I can’t imagine life without her.”

Vanessa insisted, “Gigi most likely would have become the best player in the WNBA… She would have made a huge difference for women’s basketball. She was motivated to change how people viewed women in sports,” Bryant said.

She added, “She had so much to offer this world… I will miss you every day.”

As for her husband of nearly 19 years, Vanessa said, “He was my sweet husband and the father of my beautiful children… He was my everything… I was his first girlfriend, his first love… his confidant, his protector… We balanced each other… He was truly the romantic one in our relationship… he planned anniversary trips, he even handmade my gifts.”

Kobe and Vanessa planned to renew their vows and hoped to “be the fun grandparents” someday.

Vanessa said Kobe also hoped daughter Natalia would take over his business, and that their younger girls, Bianka and Capri, would pursue basketball so he could spend as much time with them as he did with Gigi. She told the crowd, “I want my girls to remember what kind of man he was.”

A tearful Vanessa ended her speech, saying, “God knew [Kobe and Gianna] couldn’t be on this Earth without each other… Babe, you take care of Gigi… May you both rest in peace.”

Some of the other women to take the stage were Sabrina Ionescu and WBNA star Diana Taurasi, who shared their fond memories of Kobe and Gianna. Sabrina opened up on her last text to Kobe after his passing and stressed her struggles of referring to Kobe and Gianna in past tense. Before hugging Vanessa, she ended her speech, saying, “Kobe and Gigi, I love you forever.”

University of Connecticut Huskies women’s basketball coach Geno Auriemma took the stage after Vanessa asked him to speak. He reflected on his past conversations with Kobe, saying, “The ‘uncoachable’ one wants to know about coaching… I’m like, ‘OMG, that poor kid’… He would call and ask what defensive drills to run… These were the conversations that we would have as dads.”

He said, “When they came to UConn… there’s Dad bringing his daughter to the game… It felt more like a dad than a basketball player.”

Kobe’s former agent, Lakers general manager Rob Pelinka, then took the stage to reflect on their final text exchange regarding a baseball agent, which took place just minutes before the crash. He said, “Kobe had been texting me from the helicopter. The girl that he wanted to help was Alexis Altobelli.”

He said, “Kobe lived to make people’s lives better, up until his death.”

Pelinka was also Gigi’s godfather. He shared, “Gigi was love and grace… Her life was about blessing others. She was Kobe’s pride and joy.”

Rob also opened up about Kobe and Vanessa’s love story, from their wedding day to the romantic little things he would do for her.

Pelinka told Vanessa and their girls, “We are here for you until the end of our days.”

Alicia Keys then took the stage to perform a rendition of Beethoven’s “Piano Sonata No. 14,” popularly known as the “Moonlight Sonata,” which Kobe had learned how to play for Vanessa.

Kobe’s idol Michael Jordan was the next to speak, saying, “I’m grateful to Vanessa and the Bryant family for the opportunity to speak.”

With tears streaming down his face, Michael said, “Kobe left nothing in the tank. He left it all on the floor… Maybe it surprised a lot of people that we were close friends… Everyone wanted to talk about the comparisons between he and I… He used to call me, text me… talking about post-up moves and sometimes the triangle. At first, it was an aggravation, then it turned into admiration… He wanted to be the best basketball player he could be… I wanted to be the best big brother I could be… To do that, you have to put up with the aggravation… the late-night calls… I took great pride as I got to know Kobe Bryant… We talked about business, we talked about family, we talked about everything… He was just trying to be a better person.”

Joking that he didn’t want to be a crying meme, Jordan said, “He knows how to get to you in a way that gets to you.” 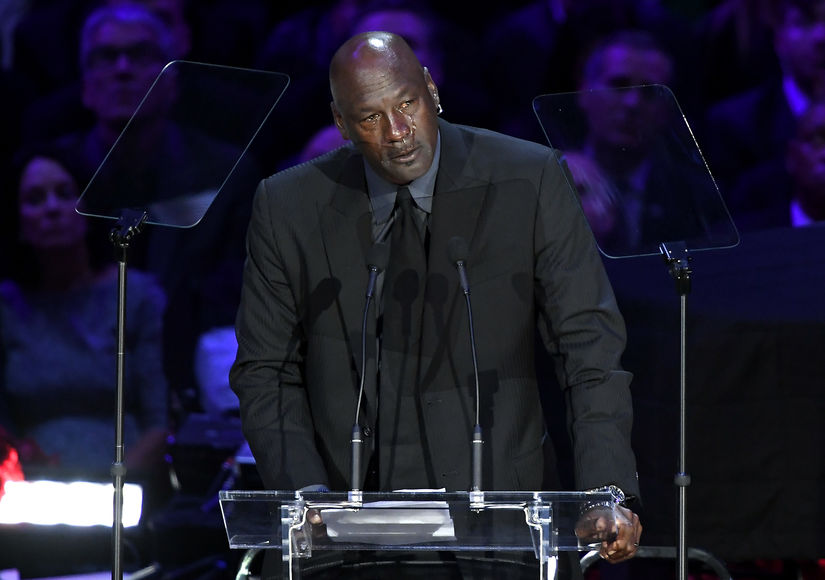 “I admired him because of his passion,” Jordan said expressing how excited he was to be a “girl dad” like Kobe. “No one knows how much time we have… We must enjoy the moment… to live in the moment… When Kobe Bryant died, a piece of me died.”

Kobe’s former teammate Shaquille O’Neal opened up about their “complicated” relationship, saying, “In truth, we maintained a respect for each other.”

O’Neal said, “Mamba, you were taken too soon… Know we got your back… I promise to teach Natalia, Bianka and Capri your [basketball] moves.”

Christina Aguilera was next up, performing an emotional cover of “Ave Maria” with an orchestra backing her. 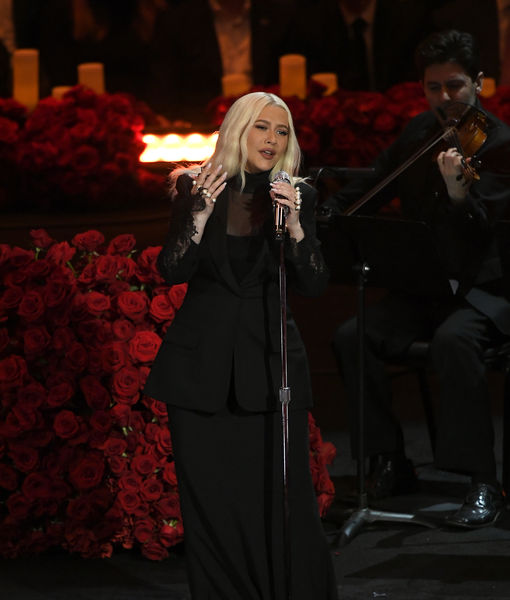 After Kimmel thanked Aguilera, he brought attention to Kobe’s Oscar-winning short film “Dear Basketball,” which was played in its entirety.

Many of Kobe’s former teammates were in the building, including Steve Nash, Pau Gasol, Caron Butler, Jordan Farmar and Rick Fox.

Earlier this month, Kobe and Gianna were laid to rest at Pacific View Mortuary in Corona Del Mar, California.

It is unknown who attended the private funeral, but it looks like Kobe’s sister Sharia was in town — Kobe’s wife Vanessa shared a video of their daughter Capri standing up with the help of “auntie Ri-Ri.”

In our last interview, Kobe opened up about life with four girls and whether or not he and Vanessa were trying for a boy. He told “Extra” in September, “She wants a boy more than I do. I’m comfortable having girls. It drives her crazy when I say that — she says, ‘We’re gonna get five girls ’cause you spoke it to existence.'”