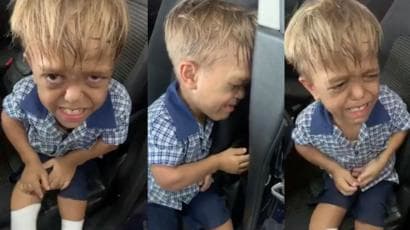 Quaden Bales, the viral nine year old Australian boy who suffered from bullying, is going viral again. This time, an old video of Quaden was located – and Quaden went on a rant that some are calling “racist” against White people.

Here is the ‘racist” video of Quaden Bayles

Quaden is biracial – his mother is Black and his father is White.

In the “rant” the young man chastises “White” people for coming to Australia, which he claims should be called the “United States of The Aboriginal.” Quaden blasts “White” people and tells them, “how dare you come to this land.”

9-year-old Australian Quaden Bayles has achondroplasia, a form of dwarfism. He first went viral three weeks ago, when his mother took the video as her son sat in the back seat of a car and posted it online.

The heartbreaking video showed Quaden crying uncontrollably. He then threatened to kill himself. His mother said to the camera, “This is what bullying does.” “Can you please educate your children, your families, your friends?”

Over 20 million views on Facebook later, the video has prompted celebrities to share messages of support, and a GoFundMe raised more than $440,000 for a trip to Disneyland.

Here is the ‘racist” video of Quaden Bayles