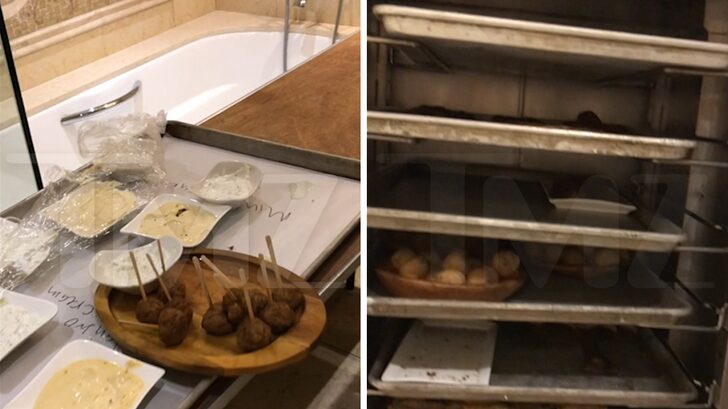 President Trump‘s Beverly Hills fundraiser featured a fire menu as far as appetizers are concerned, but hopefully they weren’t prepped in a bathroom … ’cause that’s where they ended up!

TMZ’s obtained video of the aftermath of some of the hors d’oeuvres served at the Montage hotel Tuesday night, and for some reason … they were stashed in a small bathroom — between the bathtub and the toilet.

The appetizers and drinks menu for the pro-Trump event is posted on the catering food warming cabinet — which is also in the bathroom — and along with the leftover lamb meatballs and mint yogurt sauce seen in the vid … looks like there were delicious options.

Seems like they must have been quite a hit, because there’s not much leftover … unless more food was stored away in another bathroom.

We broke the story … Trump not only raised a bunch of money at the fundraiser, but he used it as an opportunity to mock Bernie Sanders, the current front-runner to challenge him for the presidency.

We contacted a rep for the Montage and sent her the video. She said she would get back to us, but did not.