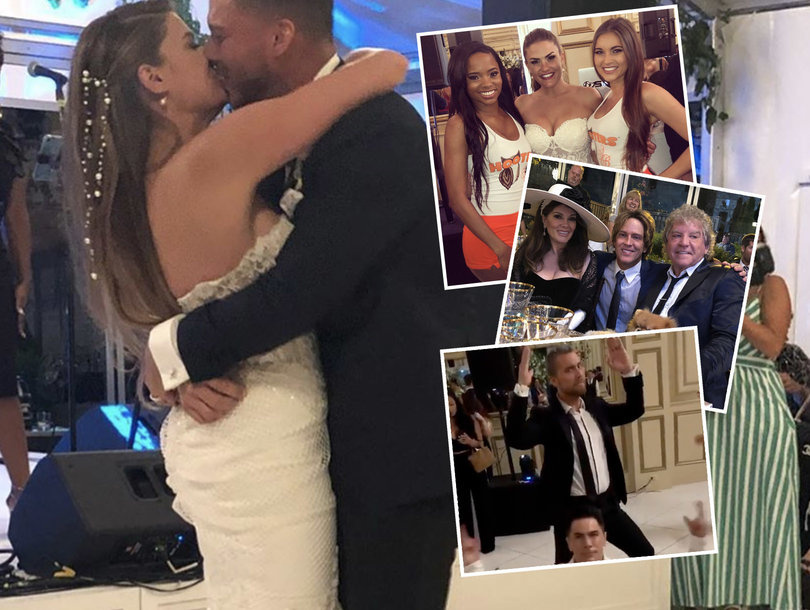 Tuesday’s episode of “Vanderpump Rules” was explosive, to say the least, as it documented the controversy over Jax Taylor and Brittany Cartwright’s original wedding pastor.

Unless you’ve been living under a rock, you know the pastor they initially hired to officiate their wedding turned out to have a homophobic past. Everyone from the cast was aware of his comments, but it wasn’t until after Lisa Vanderpump voiced her concerns that the couple selected someone new for their big day.

For your reference, below are some of the comments the pastor made in 2015, per Bravo. Brittany, who’s known this man for years and was friends with his daughters growing up, claims she knew of only the first one:

“The devil wants to legalise SIN. Just because it’s legal that doesn’t make it RIGHT!!!! How wicked is our nation becoming?”

“Let me first say, you can love people but not agree with this lifestyle or their choices. With that being said, There are people that I care for that are gay, BUT I do not condone or accept this lifestyle as it is contrary to the Word of God. The Supreme Court just ruled 5-4 to legalize gay-marriage in all 50 states. This is a time of peril for the Christian community and our nation. This agenda has been forced down our throats as many have become silent. AMERICA it’s time for spiritual awakening and may JEHOVAH have mercy on us all.”

“I will not say I’m sorry nor am I apologetic when I say, no child has a right to choose his or her gender. Parents need to start being parents and raise boys to be men and girls to be women. Daddy if you see your little fella liking girly stuff, take him fishing, play ball, but more importantly spend time with him and show him how to be a man. It has gotten so bad now that our public schools are making allowances for those who feel opposite of their God given gender, now can go to the restroom of their choice. If my girls were still in school and a young male boy was wanting to use the restroom with my girls I would have a major issue with school and it’s board. If we don’t start standing up against such non sense then we lose as a society as a whole.”

At the top of the episode, Lisa talked to Ken Todd about how she woke up to the news that Jax and Brittany’s pastor had this problematic past. They were on their way to SUR, where Ariana Madix actually pulled Lisa aside to discuss that very topic.

Ariana said she had known about the comments for months but that everyone was scared to bring them to the bride and groom’s attention. She felt they must’ve known what he said because critics had been tagging them both on social media. Lisa was appalled and said she’d talk to the couple herself.

Elsewhere, Brittany and Jax were stressed about the situation, as their wedding was only two weeks away and they didn’t agree with his views, at all. Brittany was even asked about the issue on “Watch What Happens Live,” where she assured Andy Cohen she called the pastor and he told her he didn’t feel that way about the LGBTQ community.

While viewers never saw a conversation between LVP, Jax and Brittany, the couple eventually decided to fire the guy and find someone new. Brittany was too nervous to call him, so she sent him a text. She ended up revealing at her princess-themed bridal shower that they had selected Lance Bass of NSYNC fame to be their new officiant. Everyone was overjoyed, and some even found the choice delightfully ironic.

When James Kennedy got the news, he laughed and said Jax and Brittany hired “the gayest pop star in the world” and felt they were “overcompensating and took way too long” to replace the initial officiant. To some extent, others in the group felt similarly, but only Sandoval and Ariana were willing to say anything. They felt the couple had “turned a blind eye” on the whole situation, as Tom said, “For them to act like they just realized this is bullshit.”

While at Peter Madrigal’s birthday party, Brittany posted a photo from her bridal shower. People started tearing apart her “childish” event in her comments section, prompting her to cry. Meanwhile, Sandoval pulled Jax aside and said, “I’m wondering why it took Lisa coming to you guys…” but Jax wanted nothing to do with the conversation and stormed off. “No, no, no, no. I’m not talking about this. I’m done. And it didn’t take Lisa. I’m not taking about this,” he fired back, marching over to where his soon-to-be-wife was sitting and crying.

Jax thought Brittany was crying about “the marriage pastor thing.” She wasn’t, but she soon was! “Sandoval, seriously?” she said to him as he walked over. “You have the nerve to say it took Lisa Vanderpump to say something for us to do something about it? You do not know what I’ve been going through!”

“Why are you f–king trying to do something like this to somebody? Why are you trying to hurt somebody like this?” Jax pressed, as Stassi Schroeder added, “You’re trying to make them look bad!”

“Seriously, you’re like not even a real friend,” Brittany said, as Jax stormed off again and called Sandoval a “piece of shit.” Tom defended, “I was upset about what I saw…” but Lala Kent interrupted, “We all were! So was [Brittany]!”

“That’s why I fired him, and that’s why I’m getting another pastor!” Brittany shouted through tears. Tom’s response was: “Okay, well, I wanna ask questions.” He claimed he simply wanted to have a private conversation with Jax to make sure he was “aware about these things.”

But Brittany was hysterical. “This is not my f–king fault! I did nothing wrong! We have done everything that we can do! I saw one comment, okay? One comment!” she shouted, as Tom said, “I could show you like five.”

“I saw it! Whenever I saw it, I did something about it!” she screamed back. “How dare you?! Back in January, I saw one comment.”

Sandoval then asked, “What about the transphobic shit?” but Brittany maintained she saw “none of that! I chose to believe him, okay? This was my friend. I’m so sorry that I didn’t go back and look at comments from five f–king years ago.” Lala said she felt Tom making Brittany defend herself was “disgusting,” but Sandoval insisted again that he was simply asking a question.

“You’re making yourself look like a martyr. You’re Jon Snowing yourself so hard, where I feel like you think that you’re standing up for things,” Stassi told Sandoval, who later told the camera he simply wanted his friends to stick up for their friends and their community.

Meanwhile, Kristen Doute was conversing loudly with Ariana. “But why is Tom having an opinion about it?” Kristen asked, to which Ariana replied, “He’s asking the question.”

“But why does it matter who we have marry us?!” Jax interjected, as Kristen said the issue was “none of [Tom’s] f–king business!” Tom Schwartz tried to play devil’s advocate and told Jax maybe Sandoval was simply looking out for him, but Jax didn’t think that was the case.

“That’s his best man!” Kristen shouted at Ariana, who fired back, “So he can’t have an opinion?” Kristen shouted, “No! He can’t!” Jax insisted to Ariana he just thought all preachers were supposed to be good people.

“No one who is a real friend to me would do this!” Brittany screeched across the table at Tom. “Two weeks away from my wedding. He’s a best man. I did nothing wrong! So f–k you! F–k you, Sandoval! You can f–k off. F–k off, Sandoval! He does not deserve to be in the wedding at all. I hope Jax knocks him out. Knock him the f–k out. I’m about to knock him the f–k out!”

Jax echoed his soon-to-be-wife’s sentiments, as he told the guys Sandoval was cut from the wedding. “F–king two weeks before my wedding? Why would you do something like that? He’s done, by the way. There’s no coming back from that,” Jax promised. “He’s not in my wedding anymore. There’s absolutely no way that guy’s gonna be in my wedding party.”

Spoiler alert: he still was.

Unrelated but important to note: Max Boyens asked Dayna Kathan to be “exclusive,” which she recently told TooFab didn’t last very long. Check out our interview with the newbie below.