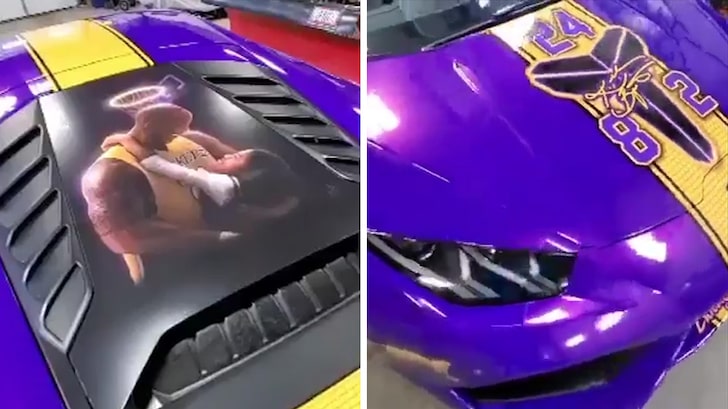 A massive Kobe Bryant fan tricked out his Lamborghini to honor the Black Mamba … and now the guy says the amazing whip can be all yours — if you’ve got around $170k!!

Joe Carbonara tells TMZ Sports he was so devastated after Kobe and his daughter, Gianna, died in a helicopter crash … he wanted to honor them with his 2015 Lamborghini Huracan.

Carbonara says he took the ride — which used to be a generic silver color — to X-Treme Graphics near Chicago to get the tribute art put on.

We’re told the shop’s owner, Steve Zielinski, loved the idea of the project so much … he spent TWO FULL DAYS wrapping it in Lakers purple and gold vinyl.

“I had to make sure it was good and not overdone,” Zielinski tells us. “And, we didn’t charge for it.”

The results of the work were impressive … Kobe’s numbers, pictures of Bryant and Gigi, the Mamba’s logo and even the names of all nine crash victims are featured on the ride.

In fact, the job was so well done … the Lambo — now dubbed the Kobe24Lambo — gained national attention when it was seen driving around NBA All-Star Weekend in Chicago.

But now, Carbonara says he’s willing to let a new owner enjoy the car … saying the ride is officially up for sale with a price tag of $170k.

In the meantime, Carbonara says you might be seeing the car in music videos and at special events … saying he’s been getting requests to show off the ride EVERYWHERE!!