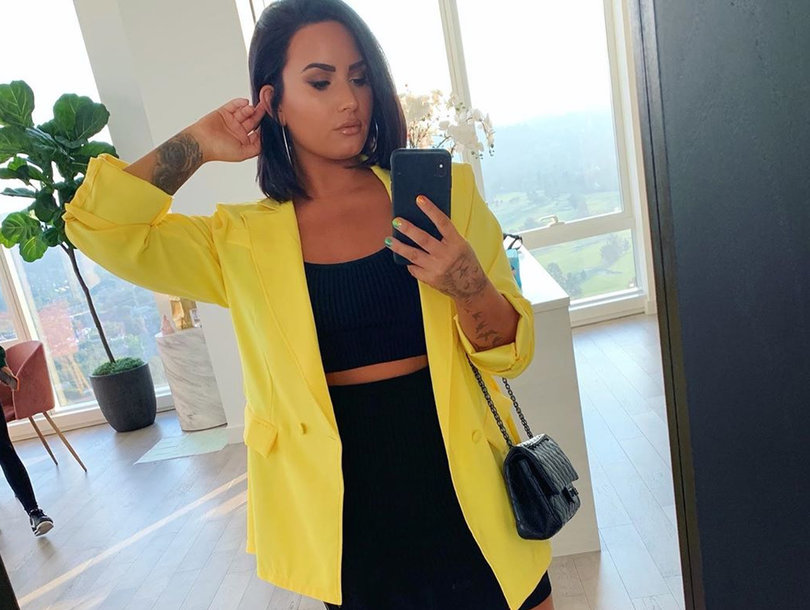 Demi Lovato got very real about the reality of eating disorders.

While appearing on Ashley Graham’s “Pretty Big Deal” podcast Tuesday, the pop star opened up about learning her intense workouts and “extreme” dieting was in fact another manifestation of her eating disorder — at a time when she thought she was in recovery.

After discussing Lovato’s unedited bikini photo from last year — which received high praise from Hollywood and beyond — Graham asked Lovato what prompted the star to make the decision to show her “authentic” self.

“I was in the studio and I was working with one of my favorite producers, Oak, we were writing and we were making this song,” Lovato began. “It was like an anthem about like body positivity because I was like, ‘We need an anthem.’ When I go into the next chapter of my career, what do I want it to be? Because I’ve always done the sexy route. I’ve never really done the whole like feeling comfortable with yourself like I don’t have to be in a one-piece leotard on-stage you know?”

“I’m tired of running myself into the ground with workouts and extreme dieting,” she continued. “I thought the past few years was recovery from an eating disorder when it was really completely falling into it and I just realized that maybe my symptoms weren’t as obvious before but it was definitely an eating issue.”

This is my biggest fear. A photo of me in a bikini unedited. And guess what, it’s CELLULIT!!!! I’m just literally sooooo tired of being ashamed of my body, editing it (yes the other bikini pics were edited – and I hate that I did that but it’s the truth) so that others think I’m THEIR idea of what beautiful is, but it’s just not me. This is what I got. I want this new chapter in my life to be about being authentic to who I am rather than trying to meet someone else’s standards. So here’s me, unashamed, unafraid and proud to own a body that has fought through so much and will continue to amaze me when I hopefully give birth one day. It’s such a great feeling to be back in tv/film while not stressing myself with a strenuous workout schedule before 14 hour days, or depriving myself from a real birthday cake rather than opting for watermelon & whip cream with candles because I was terrified of REAL cake and was miserable on some crazy diet shit. Anyway, here’s me, RAW, REAL! And I love me. And you should love you too! Now back to the studio.. I’m working on an anthem.. 🙏🏼🙌🏼🤷🏻‍♀️ also. Just so everyone’s clear.. I’m not stoked on my appearance BUT I am appreciative of it and sometimes that’s the best I can do. I hope to inspire someone to appreciate their body today too. 💗 #nationalcelulliteday #celluLIT 🔥🔥🔥

“I think when you have certain people around you telling you certain things like you should look a certain way, it makes it harder,” she explained.

“So I was in that situation and I was just running myself into the ground and I honestly think that’s kinda what led to everything happening over the past year it was just like me thinking I found recovery when I didn’t and then living this kind of lie and trying to tell the world I was happy with myself when I really wasn’t,” Lovato said, who experienced a near-fatal drug overdose in 2018.

After realizing she wasn’t happy, the “Sorry Not Sorry” singer said she “made a choice” going into her next album to present herself as she is.

“I’m not going to worry about what I look like,” Lovato told Graham. “I’m not going to worry about trying to look a certain way or fit a certain mold or whatever like just not who I am someone needs to stand up for people who don’t naturally look that way. Like I had to work my ass off every day in the gym six days a week to maintain that figure and that led me only one way and I don’t want to go down that path again. So I’m not willing to destroy my mental health to look a certain way.”

Lovato said she didn’t have a person there to notice the red flags about her excessive workouts, noting that there were times where she felt like she “lived” at the gym.

Lovato said she’s working on loving and accepting her body, rather than convincing herself of something she doesn’t believe.

“I have a bunch of people that I work with in the recovery aspect of my life, one of them is a dietician, one of them is a therapist,” she explained, adding that her dietitian told her it’s more about focusing on body “acceptance,” rather than body “positivity.”

Lovato added, “Now when I look in the mirror and I start to have a negative thought, I don’t stop and say, ‘No, you’re beautiful, you’re gorgeous, I love you, you’re perfect the way you are.’ Because I don’t believe that. So what I say to myself is, ‘You’re healthy and I accept you.'”

“Oh, that’s powerful,” Graham chimed in, reciting the words, and Lovato continued. “So you express gratitude in the health and then you just express reality in accepting yourself rather than trying to convince yourself of something that you don’t believe. I would love to be in a place where I can say I’m super confident in my body, but the reality is, I’m not.”

Graham took to Instagram to praise Lovato’s candor on her podcast. Sharing a clip from the episode, above, the model wrote, “I am so proud to call @ddlovato a friend and I’m in awe of her strength and openness on today’s episode of @prettybigdealpod.”

“Her faith, wisdom, and new found awareness has gotten her to a place where she’s comfortable enough to set boundaries or take a pause to heal; which is something we can all learn from,” Graham continued. “I’m so excited for this next chapter of her career, it’s going to be the best yet because she finally gets to be true to herself ❤️ Thank you Demi for coming on and showing your fans that while pain and recovery aren’t simple, healing and strength are still possible.”

Listen to more from Lovato on Graham’s podcast here.